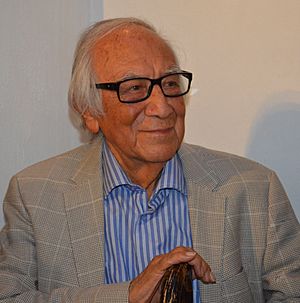 Arturo García Bustos (August 8, 1926 – April 7, 2017) was a Mexican painter and print maker. He was known as one of “Los Fridos” which were students who studied under Frida Kahlo at her home in Coyoacán. He was born in Mexico City.

While he was better known for his graphic work, he also did a number of murals. In 1947 he assisted Frida Kahlo with a mural at the Josefa Ortiz de Domínguez House in Coyoacán. Most of his career was spent teaching and giving lectures, seminars and conferences. He taught engraving at the Escuela de Bellas Artes in Guatemala City and founded the Taller de Grabado at the Casa del Lago in Chapultepec.

All content from Kiddle encyclopedia articles (including the article images and facts) can be freely used under Attribution-ShareAlike license, unless stated otherwise. Cite this article:
Arturo García Bustos Facts for Kids. Kiddle Encyclopedia.