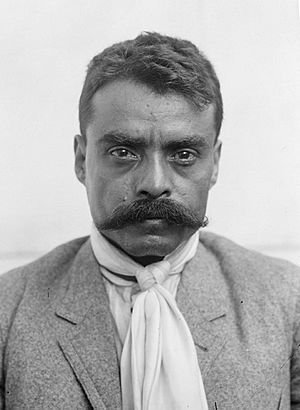 Zapata was ambushed and shot by Mexican troops in 1919. He is a folk hero in Mexico to this day.

Emiliano Zapata was born to Gabriel Zapata and Cleofas Jertrudiz Salazar of Anenecuilco, Morelos. Zapata's family were Mexicans of Nahua and Spanish ancestry. He was the ninth of ten children.

All content from Kiddle encyclopedia articles (including the article images and facts) can be freely used under Attribution-ShareAlike license, unless stated otherwise. Cite this article:
Emiliano Zapata Facts for Kids. Kiddle Encyclopedia.