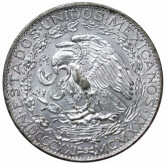 A two-peso coin from 1921, issued to commemorate the centennial of the independence of Mexico.

The peso (sign: $; code: MXN) is the currency, or money, of Mexico. The symbol used for the peso is "$", which is the same as for the US dollars it got its symbol from the Spanish-Mexican currency. It is one of the most traded currencies in the world. The current ISO 4217 code for the peso is MXN; before its value was changed in 1993, the code MXP was used. The peso is made up of 100 centavos, represented by "¢". The name comes from the Spanish words pesos oro (gold weights) or pesos plata (silver weights). The meaning of peso in English is weight.

All content from Kiddle encyclopedia articles (including the article images and facts) can be freely used under Attribution-ShareAlike license, unless stated otherwise. Cite this article:
Mexican peso Facts for Kids. Kiddle Encyclopedia.