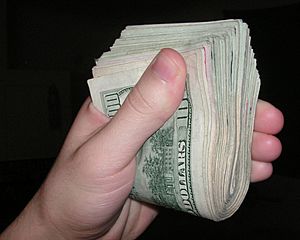 A wad of United States currency

In economics, cash is money in the physical form of currency, such as banknotes and coins. In bookkeeping and finance, cash is current assets comprising currency or currency equivalents that can be accessed immediately or near-immediately (as in the case of money market accounts). Cash is seen either as a reserve for payments, in case of a structural or incidental negative cash flow or as a way to avoid a downturn on financial markets.

The English word cash is derived from the Tamil / Kannada / Malayalam / Telugu (South Indian Dravidian languages) word kaasu meaning money. In Southern India the word kaasu/kasa is still used today to refer to money and cash in the aforementioned languages. The history of usage is not clear however, available documents point to the fact that the same word was in usage for over a thousand years far before the arrival of outsiders including Arabs and Europeans on the continent. Later traders of Persian, Arab and European origins, who started trading (spice trade) with the Southern India princely states, used the modified version of the word. They started and employed the modified usage of the word during the reign of Cyrus II followed by the establishment of the “formal” banking system and around the same time of the establishment of the credit and checking unions during the reign of Darius I, who also minted the first face-coins. This form along with this meaning entered into Latin giving rise to forms such as capsa “money box” (cf. OPers. Kshatrapavan = Satrap “an ancient Persian commercial and state confinement”) and case eventually passing into Middle French as caisse meaning “money in hand, coin.”

"To cash", the verbalization of the noun means "to convert to cash", as in the expression "to cash a cheque". 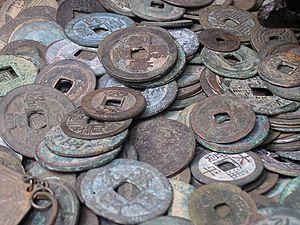 The first solid evidence of humans exchanging cash with gold currency occurred in Egypt around 3,000 B.C.E . In Western Europe, after the Collapse of the Western Roman Empire, coins, silver jewelry and hacksilver (silver objects hacked into pieces) were for centuries the only form of money, until Venetian merchants started using silver bars for large transactions in the early Middle Ages. In a separate development, Venetian merchants started using paper bills, instructing their banker to make payments. Similar marked silver bars were in use in lands where the Venetian merchants had established representative offices. The Byzantine empire and several states in the Balkan area and Kievan Rus also used marked silver bars for large payments. As the world economy developed and silver supplies increased, in particular after the colonization of South America, coins became larger and a standard coin for international payment developed from the 15th century: the Spanish and Spanish colonial coin of 8 reales. Its counterpart in gold was the Venetian ducat.

Coin types would compete for markets. By conquering foreign markets, the issuing rulers would enjoy extra income from seigniorage (the difference between the value of the coin and the value of the metal the coin was made of). Successful coin types of high nobility would be copied by lower nobility for seigniorage. Imitations were usually of a lower weight, undermining the popularity of the original. As feudal states coalesced into kingdoms, imitation of silver types abated, but gold coins, in particular the gold ducat and the gold florin were still issued as trade coins: coins without a fixed value, going by weight. Colonial powers also sought to take away market share from Spain by issuing trade coin equivalents of silver Spanish coins, without much success.

In the early part of the 17th century, English East India Company coins were minted in England and shipped to the East. In England over time the word ‘Cash’ was adopted from Sanskrit कर्ष karsa, a weight of gold or silver but akin to Old Persian 𐎣𐎼𐏁 karsha, unit of weight (83.30 grams). East India Company coinage had both Urdu and English writing on it, to facilitate its use within trade. In 1671 the directors of The East India Company ordered a mint to be established at Bombay, known as Bombain. In 1677 this was sanctioned by the Crown, the coins, having received royal sanction, were struck as silver Rupees; the inscription runs "The Rupee of Bombaim", by authority of Charles II.

At about this time coins were also being produced for The East India Company at the Madras mint. The currency at The Company’s Bombay and Bengal administrative regions was the Rupee. At Madras, however, the Company's accounts were reckoned in “pagodas”, “fractions”, “fanams”, “faluce” and “cash”. This system was maintained until 1818 when the rupee was adopted as the unit of currency for the Company's operations, the relation between the two systems being 1 pagoda = 3-91 rupees and 1 rupee = 12 fanams.

Meanwhile, paper money had been developed. At first, it was thought of for emergency issues, hence were most popular in the colonies of European powers. In the 18th century, important paper issues were made in colonies such as Ceylon and the bordering colonies of Essequibo, Demerara and Berbice. John Law did pioneering work on banknotes with the Banque Royale. However, the relation between money supply and inflation was still imperfectly understood and the bank went under, while its notes became worthless when they were over-issued. The lessons learned were applied to the Bank of England, which played a crucial role in financing Wellington's Peninsular war against French troops, hamstrung by a metallic Franc de Germinal.

The ability to create paper money made nation-states responsible for the management of inflation, through control of the money supply. It also made a direct relation between the metal of the coin and its denomination superfluous. From 1816, coins generally became token money, though some large silver and gold coins remained standard coins until 1927. The World War I saw standard coins disappear to a very large extent. Afterwards, standard gold coins, mainly British sovereigns, would still be used in colonies and less developed economies and silver Maria Theresa thalers dated 1780 would be struck as trade coins for countries in East Asia until 1946 and possibly later locally.

Cash has now become a very small part of the money supply. Its remaining role is to provide a form of currency storage and payment for those who do not wish to take part in other systems, and make small payments conveniently and promptly, though this latter role is being replaced more and more frequently by electronic payment systems. Research has found that the demand for cash decreases as debit card usage increases because merchants need to make less change for customer purchases.

Cashless society is the idea that in the future cash will be redundancy having been replaced by electronic means of transfer. In the UK it is now reported that 1 in 7 people no longer carries or use cash.

In bookkeeping and finance, cash can also refer to checks, money orders, cashier's checks, bank drafts, or traveler's checks. In all these forms, the term indicates the most liquid form of assets, which have a fixed value and can be easily converted to currency: "ready money". For example, wages or salaries paid as "cash" (as opposed to, e.g., stock options) would in most countries normally be paid with checks or direct bank deposits, which are trivially convertible to currency.

All content from Kiddle encyclopedia articles (including the article images and facts) can be freely used under Attribution-ShareAlike license, unless stated otherwise. Cite this article:
Cash Facts for Kids. Kiddle Encyclopedia.