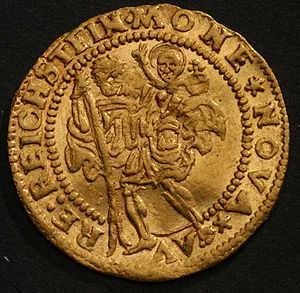 A ducat is a gold coin that was used for trade in Europe until World War I. The first ducat was made in silver by Roger II of Sicily in 1140. In 1284 the Republic of Venice started making the gold ducat which came to be widely used. The value of a ducat at the beginning of the 20th century was nine shillings and fourpence or a little more than four United States dollars.

All content from Kiddle encyclopedia articles (including the article images and facts) can be freely used under Attribution-ShareAlike license, unless stated otherwise. Cite this article:
Ducat Facts for Kids. Kiddle Encyclopedia.