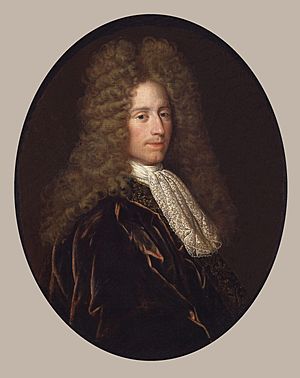 John Law (baptized 21 April 1671 - 21 March 1729) was a Scottish economist who believed that money was only a means of exchange that did not have wealth in itself, and that national wealth depended on trade. He is said to be the father of finance, responsible for the adoption or use of paper money or bills in the world today.

All content from Kiddle encyclopedia articles (including the article images and facts) can be freely used under Attribution-ShareAlike license, unless stated otherwise. Cite this article:
John Law Facts for Kids. Kiddle Encyclopedia.