Maximilian I of Mexico facts for kids 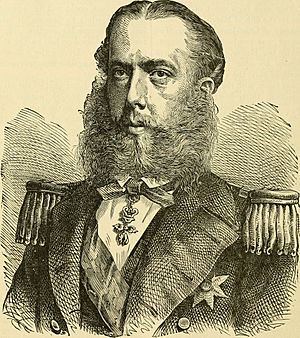 Maximilian I of Mexico

Maximilian I of Mexico (1832 – 1867) was a member of the Imperial House of Habsburg-Lorraine. After a distinguished career in the Austrian Navy he was proclaimed Emperor of Mexico, during the Second Mexican Empire.

Many Europeans, and Viennese in particular, suspected that he was actually fathered by Napoleon II of France. There was a close relationship between Sophie and Napoleon II. It was said that Sophie never recovered after his death and that she blamed it on Metternich for the rest of her life.

Maximilian ruled as the Emperor of Mexico from 1864 to 1867. He was installed by occupying French forces under Napoleon III. When the French left in 1867, Maximilian refused to go with them, believing he had the support of the people.

Maximilian was shocked by the living conditions of the poor in contrast to the magnificent haciendas of the upper class. His wife Empress Carlota of Mexico began holding parties for the wealthy Mexicans to raise money for poor houses. One of Maximilian's first acts as Emperor was to restrict working hours and abolish child labour. He cancelled all debts for peasants over 10 pesos, restored communal property and forbade all forms of corporal punishment. He supported land reforms, religious freedom, and extending the right to vote beyond the landholding class. These liberal policies caused opposition from the wealthy and the landowners, led by Benito Juárez under the banner of republicanism. 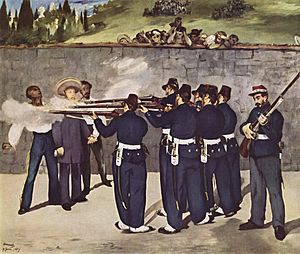 The Execution of Emperor Maximilian by Manet (1868)

Maximilian was captured by Benito Juarez’s Republican forces and executed by firing squad on 19 June 1867.

All content from Kiddle encyclopedia articles (including the article images and facts) can be freely used under Attribution-ShareAlike license, unless stated otherwise. Cite this article:
Maximilian I of Mexico Facts for Kids. Kiddle Encyclopedia.