Kingdom of Saxony facts for kids

The Kingdom of Saxony (German: Königreich Sachsen), existed from 1806 until 1918.

From 1871 it was part of the German Empire, and after World War I it became part of the Weimar Republic. Its capital was the city of Dresden, and its modern successor state is the Free State of Saxony.

Before 1806 Saxony was the Electorate of Saxony in the Holy Roman Empire. This meant that the princes who ruled Saxony were prince-elector Kurfürst were some of the people who could elect a new Holy Roman Emperor.

When Emperor Francis II was defeated by Napoleon at the Battle of Austerlitz and the empire was dissolved the electorate became an independent kingdom. The last elector of Saxony became King Frederick Augustus I.

The Catholic ruler of Saxony was one of the few German leaders to support the French. Saxony was put under Russian occupation and 40% of the Kingdom, including the historically significant Wittenberg, home of the Protestant Reformation, was taken by Prussia, but Frederick Augustus was allowed back to rule the remainder of his kingdom, which still included the major cities of Dresden and Leipzig. The Kingdom also joined the German Confederation, the new organization of the German states to replace the Holy Roman Empire.

The Austro-Prussian War and the German Empire 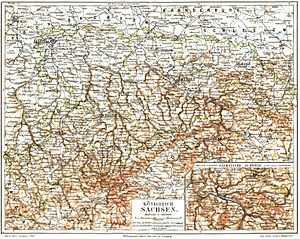 During the 1866 Austro-Prussian War, Saxony sided with Austria. The Saxon army was the only large army to help Austria. At the peace talks Austria said Saxony should not be punished. The other states in north Germany including the large Kingdom of Hanover were annexed (taken over) by Prussia after the war. These states had promised help to Autria but did little. So Austria did not try to help them at the peace talks.

Saxony joined the Prussian-led North German Confederation the next yearin 1867. When Prussia beat France in the Franco-Prussian War of 1871, the Confederation was turned into the German Empire by Otto von Bismarck, with Wilhelm I as its Emperor.

John I, as Saxony's king, was below the Emperor, although he, like the other German princes, kept some of the rights of a sovereign ruler, including sending ambassadors other states.

The end of the kingdom

Wilhelm I's grandson Kaiser Wilhelm II abdicated in 1918 after Germany's defeat in the First World War. King Frederick Augustus III of Saxony followed him into abdication and the Kingdom of Saxony became the Free State of Saxony inside the newly-formed Weimar Republic. The Kingdom of Saxony had lasted only 112 years.

All content from Kiddle encyclopedia articles (including the article images and facts) can be freely used under Attribution-ShareAlike license, unless stated otherwise. Cite this article:
Kingdom of Saxony Facts for Kids. Kiddle Encyclopedia.