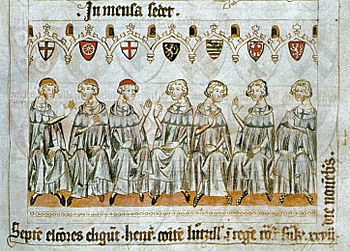 Illustration from the 1341 Codex Balduini Trevirorum showing the electors in deliberation (left to right: Archbishop of Cologne, Archbishop of Mainz, Archbishop of Trier, Count Palatine of the Rhine, Duke of Saxony, Margrave of Brandenburg and King of Bohemia). 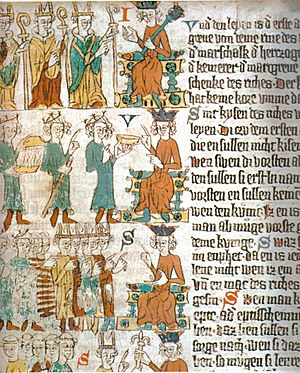 Choosing the king. At the top: the three ecclesiastical princes choosing the king, pointing at him. At the centre: the Count Palatine of the Rhine hands over a golden bowl, acting as a servant. Behind him, the Duke of Saxony with his marshall's staff and the Margrave of Brandenburg bringing a bowl of warm water, as a valet. Below, the new king in front of the great men of the empire (Heidelberg Sachsenspiegel, around 1300)

The Prince-electors (German: Kurfürst (), pl. Kurfürsten, Czech: Kurfiřt, Latin: Princeps Elector) of the Holy Roman Empire, or Electors for short, were the members of the electoral college that elected the Holy Roman Emperor.

From the 13th century onwards, the Prince-Electors had the privilege of electing the monarch who would receive the Papal coronation. After 1508, the election was sufficient to acquire the Imperial title. Charles V was the last person to be a crowned Emperor (elected 1519, crowned 1530); his successors were only elected Emperors by the electoral college, each being titled "Elected Emperor of the Romans" (German: erwählter Römischer Kaiser; Latin: electus Romanorum imperator). In practice, every emperor from 1440 onwards (except for Charles VII and Francis I) came from the Austrian House of Habsburg, and the Electors merely ratified the Habsburg succession.

The dignity of Elector carried great prestige and was considered to be second only to that of King or Emperor. The Electors had exclusive privileges that were not shared with the other princes of the Empire, and they continued to hold their original titles alongside that of Elector. The heir apparent to a secular prince-elector was known as an electoral prince (German: Kurprinz).

All content from Kiddle encyclopedia articles (including the article images and facts) can be freely used under Attribution-ShareAlike license, unless stated otherwise. Cite this article:
Prince-elector Facts for Kids. Kiddle Encyclopedia.