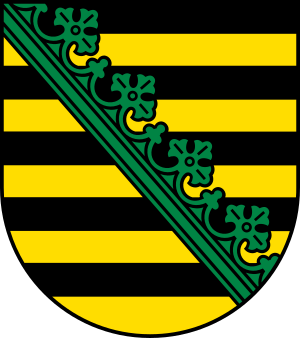 Coat of arms of Saxony used since the accession of the House of Ascania to dukedom in 1180, comprising the Ascanian crest with an added bendwise crancelin indicating the Saxon ducal rank.

This article lists Dukes, Electors, and Kings ruling over territories named Saxony from the beginning of the Saxon Duchy in the 9th century to the end of the Saxon Kingdom in 1918.

When the Welfs left in 1180, the Duchy of Saxony lost a lot of territory. Westphalia fell to the Archbishop of Cologne, while the Duchies of Brunswick and Lüneburg remained with the Welfs. The Ascanian Dukes had their base further east, near the Elbe, so the name Saxony moved towards the east. The post carve-up Saxony is therefore sometimes called the younger Duchy of Saxony. Also the counting of its dukes its mixed up. While the first post carve-up duke is sometimes called Bernard III - because of two predecessors of the same name before 1180 - or Bernard I with his great-great-great-great grandson Bernard II being counted second. The second post carve-up duke Albert I is already usually counted as the first, although before 1180 he had one predecessor of the same name, his grandfather Albert the Bear.

Ascanian or younger Duchy of Saxony

) and added a "bendwise crancelin", a crown diagonally across the coat of arms, symbolising the Saxon ducal crown, as new coat-of-arms of Saxony (

). The later rulers of the House of Wettin adopted the Ascanian coat-of-arms.

Since the Duke of Saxony was considered one of the prince-electors electing a new Holy Roman Emperor, there was an argument between the lines of Lauenburg and Wittenberg about who should cast Saxony's vote. In 1314 both lines found themselves on different sides in a double election. Eventually, the Dukes of Saxe-Wittenberg succeeded in 1356 after the promulgation of the Golden Bull. To distinguish him from other rulers bearing the title Duke of Saxony, he was commonly called Elector of Saxony.

In 1303 the brothers split their inheritance between them, however, only two brothers had heirs creating the Bergedorf-Mölln and the Ratzeburg-Lauenburg lines.

First named Saxe-Mölln, however, renamed after reorganising territory, including parts of Albert III's share in 1321.

In 1401, the elder branch became extinct and Lauenburg rejoined the Ratzeburg-Lauenburg line.

First named Saxe-Bergedorf-Lauenburg, however, renamed after reorganising territory, including parts of Albert III's share in 1321.

In 1401, the younger branch inherited Lauenburg and other possessions of the extinct elder Bergedorf-Mölln line.

For the predecessor see the section Ascanian or younger Duchy of Saxony above in this article.

The Albertines were a junior branch of the Wettin dynasty of Electors of Saxony (section below), who ruled in Northern Thuringia and Southern Meissen until they replaced the senior "Ernestine" branch as Electors and rulers of most Saxon territory in 1547.

Following their displacement by the Albertines, the Ernestine branch of the Wettins continued to rule in southern Thuringia as "Dukes of Saxony", but their lands eventually split up into many different tiny "Ernestine duchies". Of these, Saxe-Weimar-Eisenach, Saxe-Coburg-Gotha, Saxe-Meiningen, and Saxe-Altenburg lasted until 1918. This article does not list the subsequent Ernestine dukes.

The Golden Bull of 1356 confirmed the right to participate in the election of a Holy Roman Emperor to the Duke of Saxony in the Saxe-Wittenberg line. For the predecessor see the section Ascanian Dukes of Saxe-Wittenberg above in this article.

The Holy Roman Empire came to an end in 1806. The Elector of Saxony, allied to Napoleon I, anticipated its dissolution by becoming the ruler of an independent Kingdom of Saxony in 1806.

Saxony became a republic at the end of the German Empire in 1918. For later rulers, see List of Ministers-President of Saxony.

All content from Kiddle encyclopedia articles (including the article images and facts) can be freely used under Attribution-ShareAlike license, unless stated otherwise. Cite this article:
List of rulers of Saxony Facts for Kids. Kiddle Encyclopedia.