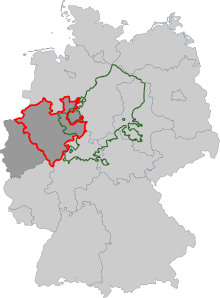 Westphalia (German: Westfalen) is a region in Germany. The cities of Arnsberg, Bielefeld, Bochum, Detmold, Dortmund, Gelsenkirchen, Hagen, Minden and Münster are in its centre. In 1946, the state of North Rhine-Westphalia was created, which includes part of the historical region.

Westphalia is roughly the region between the rivers Rhine and Weser, north and south of the Ruhr River. During the course of history, different places and regions were called "Westphalia", the borders of the region can therefore not be defined exactly, as they depend on the entity and time talked about. For the same reason, there are different specifications of its area and number of people. They range between 16,000 and 22,000 km2 (6,200 and 8,500 sq mi) in land area, and between 4.3 million and 8 million people. There is a consensus that Münster, Bielefeld and Dortmund are part of Westphalia.

A linguistic definition of Westphalia (see Westphalian language) includes the former Prussian Province of Westphalia (except Siegen-Wittgenstein), Lippe, the region around Osnabrück and the greater area of the Emsland. Present-day common use, however, often restricts the notion to the present part of North Rhine-Westphalia.

Westphalia is known for the 1648 Peace of Westphalia which ended the Thirty Years' War, as the two treaties were signed in Münster and Osnabrück.

All content from Kiddle encyclopedia articles (including the article images and facts) can be freely used under Attribution-ShareAlike license, unless stated otherwise. Cite this article:
Westphalia Facts for Kids. Kiddle Encyclopedia.