Siegen-Wittgenstein is a landkreis (rural district or county) in the southeast of North Rhine-Westphalia, Germany. 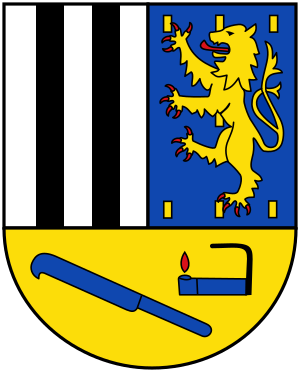 On the coat of arms, the two upper sections show, to the right, the arms of the Dukes of Nassau, who founded Siegen, and to the left, those of the Counts of Sayn-Wittgenstein. At the bottom a miner's lamp and a coppicing hook are pictured, to remember the mining and charcoal-burning history of the district.

All content from Kiddle encyclopedia articles (including the article images and facts) can be freely used under Attribution-ShareAlike license, unless stated otherwise. Cite this article:
Siegen-Wittgenstein Rural District Facts for Kids. Kiddle Encyclopedia.