Maximilian I of Habsburg (22 March 1459 – 12 January 1519), the son of Frederick III, Holy Roman Emperor and Eleanor of Portugal, was King of the Romans from 1486 and Holy Roman Emperor from 1493 until his death. He had ruled jointly with his father for the last ten years of his father's reign, from circa 1483. He expanded the influence of the House of Habsburg through both war and marriage, but also lost the Austrian territories in today's Switzerland to the Swiss Confederacy.

By marrying his son Philip to then-Crown Princess Joanna of Castile in 1498, Maximilian established the Habsburg dynasty in Spain and allowed his grandson Charles to hold the throne of both León-Castile and Aragon, therefore causing him to be the first de jure King of Spain. Having outlived his father Philip, Charles succeeded Maximilian as Holy Roman Emperor in 1519, and thus ruled both the Holy Roman Empire and the Spanish Empire simultaneously.

The son of the Habsburg Holy Roman Emperor Frederick III and Eleanor of Portugal, Maximilian was born at Wiener Neustadt on 22 March, 1459. At the time, the Dukes of Burgundy, a sidebranch of the French royal family, with their sophisticated nobility and court culture, were highly respected regents, and Duke of Burgundy Charles the Bold was the chief opponent of Maximilian's father Frederick III. Frederick was concerned of Burgundy's expansive tendencies on the western border of his Holy Roman Empire, leaging to him attempting to secure the marriage of Charles' only daughter Mary to his son Maximilian. In this, he was ultimately successful after the Siege of Neuss (1474–75). The wedding between Maximilian and Mary took place on the evening of August 16, 1477.

Reign in Burgundy and The Netherlands

Mary inherited the vast Burgundian domains in France and the Low Countries upon her father's death in the Battle of Nancy on 5 January 1477. Already before his crownation as the King of the Romans in 1486, Maximilian decided to secure this distant and extensive Burgundian inheritance to his family, the House of Habsburg, at all costs.

The Duchy of Burgundy was also been claimed by the French crown under Salic Law, and Louis XI, King of France contested the Habsburg claim to the Burgundian inheritance. Maximilian undertook the defence of his wife's dominions from an attack by Louis XI and defeated the French forces at Guinegatte, the modern Enguinegatte, on 7 August, 1479.

The wedding contract between Maximilian and Mary stipulated, that only the children of bride and groom had a right to inherit, but not the surviving parent. This precarious rule was transformed and bypassed by Maria with a promise to transfer as a gift in case of her death. After Mary's tragic death in a riding accident on 27 March 1482 near the Wijnendale Castle, Maximilian's aim was now to secure the inheritance to one of his and Mary's children, Philip the Handsome.

Some of the Netherland provinces were hostile to Maximilian, and they signed a treaty with Louis in 1482 which forced Maximilian to give Franche-Comté and Artois to Louis. Maximilian continued to govern Mary's remaining inheritance in the name of Philip the Handsome. After the regency ended, Maximilian and Charles VIII exchanged these two territories for Burgundy and Picardy in the Treaty of Senlis (1493). Thus ultimately much of the Netherlands became and remained a Habsburg possession.

Reign in the Holy Roman Empire

Elected King of the Romans (Rex Romanorum) 16 February 1486 in Frankfurt am Main at his father's initiative and crowned on 9 April 1486 in Aachen, Maximilian also stood at the head of the Holy Roman Empire upon his father's death in 1493.

As the treaty of Senlis had solved the French's differences with the Holy Roman Empire, King of France Ludvig XII had his borders secured in the north and turned his attention to Italy, where he made claims for the Duchy of Milan. In 1499/1500 he conquered it and drove the Sforza regent Lodovico il Moro to exile. This brought him into a potential conflict with Maximilian, who on 16 March 1494 had married married Bianca Maria Sforza, a daughter of the Duke of Milan. However, Maximilian was unable to hinder the French from taking over Milan. The prolonged Italian Wars resulted, with Maximilian joining the Holy League to counter the French.

The situation in Italy was not the only problem Maximilian had at the time. The Swiss won a decisive victory against the Empire in the battle of Dornach 22 July 1499. Maximilian had no choice but to agree to a peace treaty signed on 22 September 1499 in Basel granting the Swiss Confederacy independence from the Holy Roman Empire. He is often referred to as "The Last Knight".

Within the Holy Roman Empire, Maximilian faced pressure from regents who believed that the King's continued wars with French to increase the power of his own house were not in their best interests. However, consensus existed that in order to preserve the unity of the Empire, deep reforms were needed. The reforms, which had been delayed for a long time, were launched in the 1495 Reichstag at Worms. A new organ, the Reichskammergericht was introduced, and it was to be largely independent from the King. To finance it, a new tax, the Gemeine Pfennig was launched. However, its collection was never fully successful. The regents wanted to more independence from the King and a strengthening of their own territorial rule. This led to Maximilian agreeing to establish an organ called the Reichsregiment, which would meet in Nürnberg and consist of the deputies of the King, the regents, the classes and the prince electors. The new organ proved itself relatively powerless and its power returned to Maximilian again in 1502.

Due to the difficult external and internal situation, Maximilian also felt it necessary to introduce reforms on the lands of the House of Habsburg, in order to finance his army. Using the Burgundian institutions as an ideal, he attempted to create a unified state. This was not very successful, but one of the lasting results was the creation of three different subdivions. These included Lower Austria, Upper Austria, and Vorderösterreich.

In 1508, Maximilian, with Pope Julius II's assent, took the title of Erwählter Römischer Kaiser ("Elected Roman Emperor"), thus ending the centuries-old custom that the Holy Roman Emperor had to be crowned by the pope. 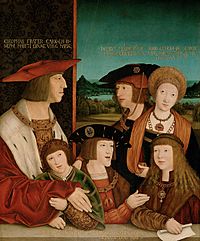 Emperor Maximilian I and his family; with his son Philip the Fair, his wife Mary of Burgundy, his grandsons Ferdinand I and Charles V, and Louis II of Hungary (husband of his granddaughter Mary of Austria).

As part of the Treaty of Arras, Maximilian betrothed his three-year-old daughter Margaret to the Dauphin (later Charles VIII), son of his adversary Louis XI. Louis had attempted seven years earlier to arrange a betrothal between the Dauphin and Margaret's mother, Mary. Under the terms of Margaret's betrothal, she was sent to Louis to be brought up under his guardianship. Despite the death of Louis in 1483, shortly after Margaret arrived in France, she remained at the French court. The Dauphin, now Charles VIII, was still a minor, and his regent until 1491 was his sister, Anne of France. Anne's first betrothal, to the Duke of Lorraine, had ended when the Duke broke it off in order to pursue Mary of Burgundy (and died shortly afterwards). Despite Margaret's betrothal and continued presence at the French court, Anne arranged a marriage between Charles and Anne of Brittany. She, in turn, had been betrothed in 1483, and actually married by proxy in 1491, to Maximilian himself, but Charles and his sister wanted her inheritance for France. The final result of all of these machinations was that Charles repudiated his betrothal to Margaret when he came of age in 1491, invaded Brittany, forced Anne of Brittany to repudiate her unconsummated marriage to Maximilian, and married her. (They had four children who all died in infancy, and after Charles died, his widow married his cousin and successor, Louis XII.) Margaret still remained in France until 1493, when she was finally returned to her father. She married twice more.

In 1493, Maximilian contracted another marriage for himself, this time to the daughter of the Duke of Milan, whence ensued the lengthy Italian Wars with France. Thus Maximilian through his own marriages (and attempted marriage) sought to extend his sphere of influence against that of France. The marriages he arranged for both of his children more successfully fulfilled the same goal, and after the turn of the sixteenth century, his matchmaking focused on his grandchildren, for whom he looked opposite France towards the east.

In order to reduce the growing pressures on the Empire brought about by treaties between the rulers of France, Poland, Hungary, Bohemia, and Russia, as well as to secure Bohemia and Hungary for the Habsburgs, Maximilian I met with the Jagiellonian kings Ladislaus II of Hungary and Bohemia and Sigismund I of Poland at the First Congress of Vienna in 1515. There they arranged for Maximilian's granddaughter Mary to marry Louis, the son of Ladislaus, and for Anne (the sister of Louis) to marry Maximilian's grandson Ferdinand(both grandchildren being the children of Philip the Handsome, Maximilian's son, and Juana la Loca of Castile). The marriages arranged there brought Habsburg kingship over Hungary and Bohemia in 1526. Both Anne and Louis were adopted by Maximilian following the death of Ladislaus. These political marriages were summed up in the following Latin elegiac couplet: Bella gerant aliī, tū fēlix Austria nūbe/ Nam quae Mars aliīs, dat tibi regna Venus, "Let others wage war, but thou, O happy Austria, marry; for those kingdoms which Mars gives to others, Venus gives to thee." 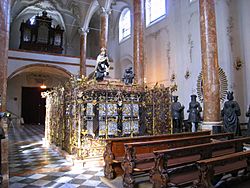 In 1501, Maximilian fell from his steed. The accident badly injured his leg, which caused him pain for the rest of his life. Some historians have suggested that Maximilian was "morbidly" depressed: From 1514, he travelled everywhere with his coffin. Maximilian died in Wels, Upper Austria, and was succeeded as Emperor by his grandson Charles V, his son Philip the Handsome having died in 1506. Although he is buried in the Castle Chapel at Wiener Neustadt, a cenotaph tomb for Maximilian is located in the Hofkirche, Innsbruck.

Maximilian was a keen supporter of the arts and sciences, and he surrounded himself with scholars such as Joachim Vadian and Andreas Stoberl (Stiborius), promoting them to important court posts. His reign saw the first flourishing of the Renaissance in Germany. He commissioned a series of three monumental woodblock prints - The Triumphal Arch (1512–18, 192 woodcut panels, 295 cm wide and 357 cm high - approximately 9'8" by 11'8½"), and a Triumphal Procession (1516–18, 137 woodcut panels, 54 m long) which is led by a Large Triumphal Carriage (1522, 8 woodcut panels, 1½' high and 8' long), created by artists including Albrecht Dürer, Albrecht Altdorfer and Hans Burgkmair.

Maximilian had a great passion for armour, not only as equipment for battle or tournaments but as an art form. The style of armour that became popular during the second half of his reign featured elaborate fluting and metalworking, and became known as Maximilian armour after the Emperor. Maximilian armour emphasized the details in the shaping of the metal itself, rather than the etched or gilded designs popular in the Milanese style. Maximilian also gave a bizarre jousting helmet as a gift to King Henry VIII - the helmet's visor featured a human face, with eyes, nose and a grinning mouth, and was modeled after the appearance of Maximilian himself. It also sported a pair of curled ram's horns, brass spectacles, and even etched beard stubble.

Maximilian had appointed his daughter Margaret as both Regent of the Netherlands and the guardian and educator of his grandsons Charles and Ferdinand (their father, Philip, having predeceased Maximilian), and she fulfilled this task well. Through wars and marriages he extended the Habsburg influence in every direction: to the Netherlands, Spain, Bohemia, Hungary, Poland, and Italy. This influence would last for centuries and shape much of European history.

Maximilian was married three times, of which only the first marriage produced offspring:

All content from Kiddle encyclopedia articles (including the article images and facts) can be freely used under Attribution-ShareAlike license, unless stated otherwise. Cite this article:
Maximilian I, Holy Roman Emperor Facts for Kids. Kiddle Encyclopedia.