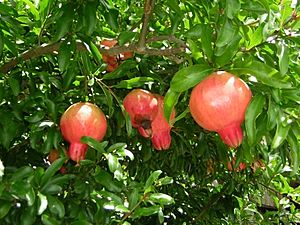 The pomegranate (Punica granatum) is a fruit. It has seeds that are covered in an edible red pulp, called sarcotesta. In the spring, beautiful blossom flowers are seen on the pomegranate tree.

The pomegranate was first known in Iran and the Himalayas in northern India and has since been spread to many kinds of dry areas with seasonal rainfall. Its Nepali name is anar. In Sri Lanka it is known as "delum".

In ancient Rome, the pomegranate was crushed and used as dye. The color was associated with the very rich or high authority figures. The Emperor himself would often wear clothes dyed by the pomegranate.

Several other cultures (such as ancient Greece) also associated the pomegranate with the "underworld". The Greeks believed that this fruit was a part of Hades' (the god of the underworld) personal garden in the underworld. 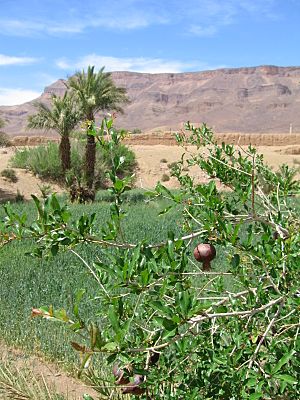 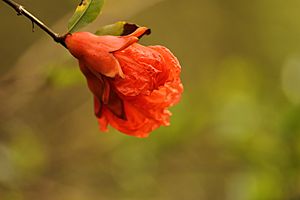 A shrub or small tree growing 5 to 10 m (16 to 33 ft) high, the pomegranate has multiple spiny branches and is extremely long-lived, with some specimens in France surviving for 200 years. P. granatum leaves are opposite or subopposite, glossy, narrow oblong, entire, 3–7 cm (1.2–2.8 in) long and 2 cm (0.79 in) broad. The flowers are bright red and 3 cm (1.2 in) in diameter, with three to seven petals. Some fruitless varieties are grown for the flowers alone.

Red-purple in color, the pomegranate fruit husk has two parts: an outer, hard pericarp, and an inner, spongy mesocarp (white "albedo"), which comprises the fruit inner wall where arils attach. Membranes of the mesocarp are organized as nonsymmetrical chambers that contain seeds inside arils, which are embedded without attachment to the mesocarp. Containing juice, the arils are formed as a thin membrane derived from the epidermal cells of the seeds. The number of seeds in a pomegranate can vary from 200 to about 1,400.

Botanically, the edible fruit is a berry with seeds and pulp produced from the ovary of a single flower. The fruit is intermediate in size between a lemon and a grapefruit, 5–12 cm (2–5 in) in diameter with a rounded shape and thick, reddish husk.

In mature fruits, the juice obtained by compressing the arils and seeds yields a sour flavor due to low pH (4.4) and high contents of polyphenols, which may cause a red indelible stain on fabrics. Primarily, the pigmentation of pomegranate juice results from the presence of anthocyanins and ellagitannins. 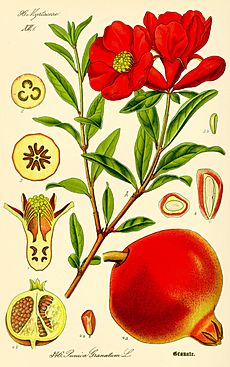 P. granatum is grown for its fruit crop, and as ornamental trees and shrubs in parks and gardens. Mature specimens can develop sculptural twisted-bark multiple trunks and a distinctive overall form. Pomegranates are drought-tolerant, and can be grown in dry areas with either a Mediterranean winter rainfall climate or in summer rainfall climates. In wetter areas, they can be prone to root decay from fungal diseases. They can be tolerant of moderate frost, down to about −12 °C (10 °F).

Insect pests of the pomegranate can include the pomegranate butterfly Virachola isocrates and the leaf-footed bug Leptoglossus zonatus, and fruit flies and ants are attracted to unharvested ripe fruit. Pomegranate grows easily from seed, but is commonly propagated from 25 to 50 cm (10 to 20 in) hardwood cuttings to avoid the genetic variation of seedlings. Air layering is also an option for propagation, but grafting fails.

P. granatum var. nana is a dwarf variety of P. granatum popularly planted as an ornamental plant in gardens and larger containers, and used as a bonsai specimen tree. It could well be a wild form with a distinct origin. It has gained the Royal Horticultural Society's Award of Garden Merit.

The only other species in the genus Punica is the Socotran pomegranate (P. protopunica), which is endemic to the Socotraan archipelago of four islands located in the Arabian Sea, the largest island of which is also known as Socotra. The territory is part of Yemen. It differs in having pink (not red) flowers and smaller, less sweet fruit.

P. granatum has more than 500 named cultivars, but evidently has considerable synonymy in which the same genotype is named differently across regions of the world.

Several characteristics between pomegranate genotypes vary for identification, consumer preference, preferred use, and marketing, the most important of which are fruit size, exocarp color (ranging from yellow to purple, with pink and red most common), seed-coat color (ranging from white to red), hardness of seed, maturity, juice content and its acidity, sweetness, and astringency. 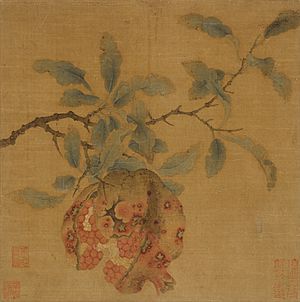 Pomegranate is native to a region from modern-day Iran to northern India. Pomegranates have been cultivated throughout the Middle East, South Asia, and Mediterranean region for several millennia, and also thrive in the drier climates of California and Arizona. Pomegranates may have been domesticated as early as the 5th millennium BC, as they were one of the first fruit trees to be domesticated in the eastern Mediterranean region.

Carbonized exocarp of the fruit has been identified in early Bronze Age levels of Tell es-Sultan (Jericho) in the West Bank, as well as late Bronze Age levels of Hala Sultan Tekke on Cyprus and Tiryns. A large, dry pomegranate was found in the tomb of Djehuty, the butler of Queen Hatshepsut in Egypt; Mesopotamian cuneiform records mention pomegranates from the mid-third millennium BC onwards.

Waterlogged pomegranate remains have been identified at the circa 14th century BC Uluburun shipwreck off the coast of Turkey. Other goods on the ship include perfume, ivory and gold jewelry, suggesting that pomegranates at this time may have been considered a luxury good. Other archaeological finds of pomegranate remains from the Late Bronze Age have been found primarily in elite residences, supporting this inference.

It is also extensively grown in South China and in Southeast Asia, whether originally spread along the route of the Silk Road or brought by sea traders. Kandahar is famous in Afghanistan for its high-quality pomegranates.

Although not native to Korea or Japan, the pomegranate is widely grown there and many cultivars have been developed. It is widely used for bonsai because of its flowers and for the unusual twisted bark the older specimens can attain. The term "balaustine" (Latin: balaustinus) is also used for a pomegranate-red color. 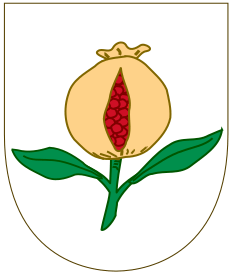 Coat of arms of Granada

Spanish colonists later introduced the fruit to the Caribbean and America (Spanish America), but in the English colonies, it was less at home: "Don't use the pomegranate inhospitably, a stranger that has come so far to pay his respects to thee," the English Quaker Peter Collinson wrote to the botanizing John Bartram in Philadelphia, 1762. "Plant it against the side of thy house, nail it close to the wall. In this manner it thrives wonderfully with us, and flowers beautifully, and bears fruit this hot year. I have twenty-four on one tree... Doctor Fothergill says, of all trees this is most salutiferous to mankind."

The pomegranate had been introduced as an exotic to England the previous century, by John Tradescant the elder, but the disappointment that it did not set fruit there led to its repeated introduction to the American colonies, even New England. It succeeded in the South: Bartram received a barrel of pomegranates and oranges from a correspondent in Charleston, South Carolina, 1764. John Bartram partook of "delitious" pomegranates with Noble Jones at Wormsloe Plantation, near Savannah, Georgia, in September 1765. Thomas Jefferson planted pomegranates at Monticello in 1771: he had them from George Wythe of Williamsburg. 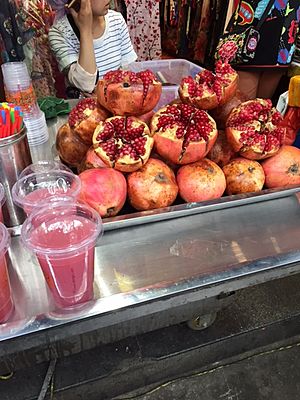 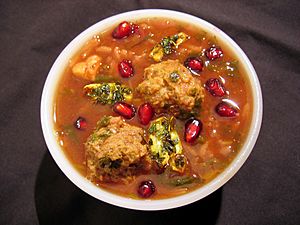 A bowl of ash-e anar, a Persian/Iranian soup made with pomegranate juice

After the pomegranate is opened by scoring it with a knife and breaking it open, the seeds are separated from the peel and internal white pulp membranes. Separating the seeds is easier in a bowl of water because the seeds sink and the inedible pulp floats. Freezing the entire fruit also makes it easier to separate. Another effective way of quickly harvesting the seeds is to cut the pomegranate in half, score each half of the exterior rind four to six times, hold the pomegranate half over a bowl, and smack the rind with a large spoon. The seeds should eject from the pomegranate directly into the bowl, leaving only a dozen or more deeply embedded seeds to remove.

Pomegranate juice can be sweet or sour, but most fruits are moderate in taste, with sour notes from the acidic ellagitannins contained in the juice. Pomegranate juice has long been a popular drink in Europe and the Middle East, and is now widely distributed in the United States and Canada.

Grenadine syrup long ago consisted of thickened and sweetened pomegranate juice, now is usually a sales name for a syrup based on various berries, citric acid, and food coloring, mainly used in cocktail mixing. In Europe, Bols still manufactures grenadine syrup with pomegranate. Before tomatoes (a New World fruit) arrived in the Middle East, pomegranate juice, molasses, and vinegar were widely used in many Iranian foods, and are still found in traditional recipes such as fesenjān, a thick sauce made from pomegranate juice and ground walnuts, usually spooned over duck or other poultry and rice, and in ash-e anar (pomegranate soup).

Pomegranate seeds are used as a spice known as anar dana (from Persian: anar + dana, pomegranate + seed), most notably in Indian and Pakistani cuisine. Dried whole seeds can often be obtained in ethnic South Asian markets. These seeds are separated from the flesh, dried for 10–15 days, and used as an acidic agent for chutney and curry preparation. Ground anardana is also used, which results in a deeper flavoring in dishes and prevents the seeds from getting stuck in teeth. Seeds of the wild pomegranate variety known as daru from the Himalayas are regarded as high quality sources for this spice.

Dried pomegranate seeds, found in some natural specialty food markets, still contain some residual water, maintaining a natural sweet and tart flavor. Dried seeds can be used in several culinary applications, such as trail mix, granola bars, or as a topping for salad, yogurt, or ice cream.

In the Caucasus, pomegranate is used mainly for juice. In Azerbaijan, a sauce from pomegranate juice narsharab, (from Persian: (a)nar + sharab, lit. "pomegranate wine") is usually served with fish or tika kabab. 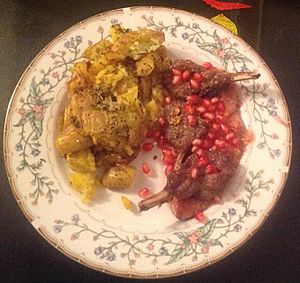 In Turkey, pomegranate sauce (Turkish: nar ekşisi) is used as a salad dressing, to marinate meat, or simply to drink straight. Pomegranate seeds are also used in salads and sometimes as garnish for desserts such as güllaç. Pomegranate syrup or molasses is used in muhammara, a roasted red pepper, walnut, and garlic spread popular in Syria and Turkey.

In Greece, pomegranate is used in many recipes, including kollivozoumi, a creamy broth made from boiled wheat, pomegranates, and raisins, legume salad with wheat and pomegranate, traditional Middle Eastern lamb kebabs with pomegranate glaze, pomegranate eggplant relish, and avocado-pomegranate dip. Pomegranate is also made into a liqueur, and as a popular fruit confectionery used as ice cream topping, mixed with yogurt, or spread as jam on toast.

In Mexico, they are commonly used to adorn the traditional dish chiles en nogada, representing the red of the Mexican flag in the dish which evokes the green (poblano pepper), white (nogada sauce) and red (pomegranate seeds) tricolor.

All content from Kiddle encyclopedia articles (including the article images and facts) can be freely used under Attribution-ShareAlike license, unless stated otherwise. Cite this article:
Pomegranate Facts for Kids. Kiddle Encyclopedia.