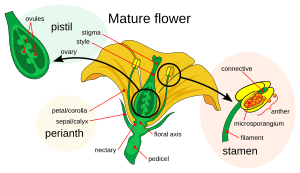 Diagram showing the parts of a mature flower. In this example the perianth is separated into a calyx (sepals) and corolla (petals) 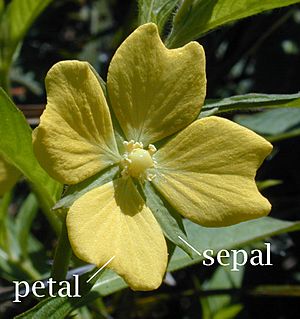 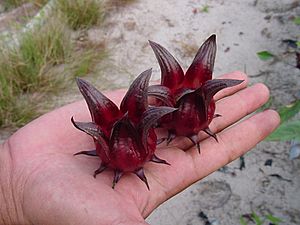 After blooming, the sepals of Hibiscus sabdariffa expand into an edible accessory fruit 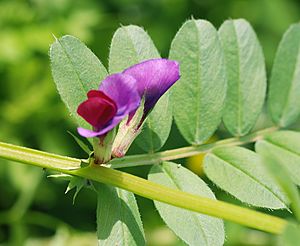 In many Fabaceae flowers, a calyx tube surrounds the petals.

A sepal is a part of the flower of angiosperms (flowering plants). Usually green, sepals typically function as protection for the flower in bud, and often as support for the petals when in bloom. The term sepalum was coined by Noël Martin Joseph de Necker in 1790, and derived from the Greek σκέπη (skepē), a covering.

Collectively the sepals are called the calyx (plural calyces), the outermost whorl of parts that form a flower. The word calyx was adopted from the Latin calyx, not to be confused with calix, a cup or goblet. Calyx derived from the Greek κάλυξ (kalyx), a bud, a calyx, a husk or wrapping, (cf Sanskrit kalika, a bud) while calix derived from the Greek κύλιξ (kylix), a cup or goblet, and the words have been used interchangeably in botanical Latin.

After flowering, most plants have no more use for the calyx which withers or becomes vestigial. Some plants retain a thorny calyx, either dried or live, as protection for the fruit or seeds. Examples include species of Acaena, some of the Solanaceae (for example the Tomatillo, Physalis philadelphica), and the water caltrop, Trapa natans. In some species the calyx not only persists after flowering, but instead of withering, begins to grow until it forms a bladder-like enclosure around the fruit. This is an effective protection against some kinds of birds and insects, for example in Hibiscus trionum and the Cape gooseberry. In other species, the calyx grows into an accessory fruit.

Morphologically, both sepals and petals are modified leaves. The calyx (the sepals) and the corolla (the petals) are the outer sterile whorls of the flower, which together form what is known as the perianth.

The term tepal is usually applied when the parts of the perianth are difficult to distinguish, e.g. the petals and sepals share the same color, or the petals are absent and the sepals are colorful. When the undifferentiated tepals resemble petals, they are referred to as "petaloid", as in petaloid monocots, orders of monocots with brightly coloured tepals. Since they include Liliales, an alternative name is lilioid monocots. Examples of plants in which the term tepal is appropriate include genera such as Aloe and Tulipa. In contrast, genera such as Rosa and Phaseolus have well-distinguished sepals and petals.

The development and form of the sepals vary considerably among flowering plants. They may be free (polysepalous) or fused together (gamosepalous). Often, the sepals are much reduced, appearing somewhat awn-like, or as scales, teeth, or ridges. Most often such structures protrude until the fruit is mature and falls off.

Examples of flowers with much reduced perianths are found among the grasses.

In some flowers, the sepals are fused towards the base, forming a calyx tube (as in the Lythraceae family, and Fabaceae). In other flowers (e.g., Rosaceae, Myrtaceae) a hypanthium includes the bases of sepals, petals, and the attachment points of the stamens.

All content from Kiddle encyclopedia articles (including the article images and facts) can be freely used under Attribution-ShareAlike license, unless stated otherwise. Cite this article:
Sepal Facts for Kids. Kiddle Encyclopedia.