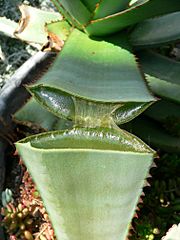 Succulent plants, such as this aloe, store water in their enlarged fleshy leaves, stems, or roots, as shown in this split aloe leaf. This allows them to survive in arid environments

Aloe is a genus of succulent plants, with over 500 species. The best-known of these is probably Aloe vera, which is widely cultivated. A. vera is probably extinct in the wild.

The genus is native to tropical and southern Africa, Madagascar, Jordan, the Arabian Peninsula, and various islands in the Indian Ocean (Mauritius, Réunion, Comoros, etc.). A few species have also become naturalized in other regions (Mediterranean, India, Australia, North and South America, etc.). 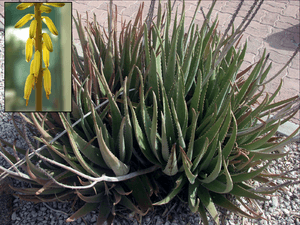 Most Aloe species have a rosette of large, thick, fleshy leaves. Aloe flowers are tubular, frequently yellow, orange, pink, or red, and are borne, densely clustered and pendant, at the apex of simple or branched, leafless stems.

Many species of Aloe appear to be stemless, with the rosette growing directly at ground level; other varieties may have a branched or unbranched stem from which the fleshy leaves spring. They vary in color from grey to bright-green and are sometimes striped or mottled. Some aloes native to South Africa are tree-like. 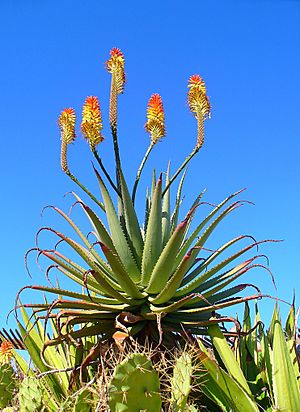 Aloe species are frequently cultivated as ornamental plants both in gardens and in pots. Many aloe species are highly decorative and are valued by collectors of succulents.

Aloe vera is used both internally and externally on humans, and is claimed to have some medicinal effects, which have been supported by scientific and medical research. They can also be made into types of special soaps or used in other natural skin care products.

Historical use of various aloe species is well documented. Of the 500+ species, only a few were used traditionally as herbal medicines, Aloe vera again being the most commonly used species. The Ancient Greeks and Romans used Aloe vera to treat wounds.

Some species, particularly Aloe vera, are used in alternative medicine and first aid. Both the translucent inner pulp and the resinous yellow aloin from wounding the aloe plant are used externally for skin discomforts. As an herbal medicine, Aloe vera juice is commonly used internally for digestive discomfort.

All content from Kiddle encyclopedia articles (including the article images and facts) can be freely used under Attribution-ShareAlike license, unless stated otherwise. Cite this article:
Aloe Facts for Kids. Kiddle Encyclopedia.