Obverse and reverse facts for kids 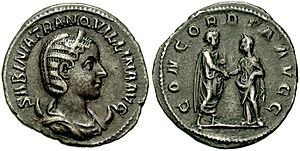 Roman imperial coin, struck c. 241, with the head of Tranquillina on the obverse, or front of the coin, and her marriage to Gordian III depicted on the reverse, or back side of the coin, in smaller scale; the coin exhibits the obverse – "head", or front – and reverse – "tail", or back – convention that still dominates much coinage today.

A Roman imperial coin of Marcus Claudius Tacitus, who ruled briefly from 275 to 276, follows the convention of obverse and reverse coin traditions.

Obverse and its opposite, reverse, refer to the two flat faces of coins and some other two-sided objects, including paper money, flags, seals, medals, drawings, old master prints and other works of art, and printed fabrics. In this usage, obverse means the front face of the object and reverse means the back face. The obverse of a coin is commonly called heads, because it often depicts the head of a prominent person, and the reverse tails.

In fields of scholarship outside numismatics, the term front is more commonly used than obverse, while usage of reverse is widespread.

The equivalent terms used in manuscript studies, print studies and publishing are "recto" and "verso".

On a Tetradrachma of Athens, struck c. 490 BC, the head of Athena, (left), is regarded as the obverse because of its larger scale and because it is a portrait head; the entire owl is depicted in a smaller scale on the reverse.

Generally, the side of a coin with the larger-scale image will be called the obverse (especially if the image is a single head) and, if that does not serve to distinguish them, the side that is more typical of a wide range of coins from that location will be called the obverse. Following this principle, in the most famous of ancient Greek coins, the tetradrachm of Athens, the obverse is the head of Athena and the reverse is her owl. Similar versions of these two images, both symbols of the state, were used on the Athenian coins for more than two centuries.

In the many republics of ancient Greece, such as Athens or Corinth, one side of their coins would have a symbol of the state, usually their patron goddess or her symbol, which remained constant through all of the coins minted by that state, which is regarded as the obverse of those coins. The opposite side may have varied from time to time. In ancient Greek monarchical coinage, the situation continued whereby a larger image of a deity, is called the obverse, but a smaller image of a monarch appears on the other side which is called the reverse. 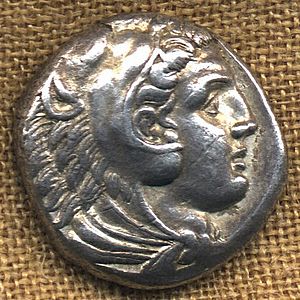 Obverse of the tetradrachm of Alexander the Great, intended to be seen as a deity, wearing the attributes of the hero, Heracles/Hercules. 325 BC.

In a Western monarchy, it has been customary, following the tradition of the Hellenistic monarchs and then the Roman emperors, for the currency to bear the head of the monarch on one side, which is almost always regarded as the obverse. This change happened in the coinage of Alexander the Great, which continued to be minted long after his death. After his conquest of ancient Egypt, he allowed himself to be depicted on the obverse of coins as a god-king, at least partly because he thought this would help secure the allegiance of the Egyptians, who had regarded their previous monarchs, the pharaohs, as divine. The various Hellenistic rulers who were his successors followed his tradition and kept their images on the obverse of coins.

Solidus of Justinian II after 705. Christ is on the obverse (left), the emperor on the reverse.

A movement back to the earlier tradition of a deity being placed on the obverse occurred in Byzantine coinage, where a head of Christ became the obverse and a head or portrait (half or full-length) of the emperor became considered the reverse. The introduction of this style in the gold coins of Justinian II from the year 695 provoked the Islamic Caliph, Abd al-Malik, who previously had copied Byzantine designs, replacing Christian symbols with Islamic equivalents, finally to develop a distinctive Islamic style, with just lettering on both sides of their coins. This script alone style then was used on nearly all Islamic coinage until the modern period. The type of Justinian II was revived after the end of Iconoclasm, and with variations remained the norm until the end of the Empire. Without images, therefore, it is not always easy to tell which side will be regarded as the obverse without some knowledge.

Silver rupee using Mughal conventions, but minted by the British East India Company Madras Presidency between 1817 and 1835. On rupees, the side that carries the name of the ruler is considered the obverse.

After 695 Islamic coins avoided all images of persons and usually contained script alone. The side expressing the Six Kalimas (the Islamic profession of faith) is usually defined as the obverse.

A convention exists typically to display the obverse to the left (or above) and the reverse to the right (or below) in photographs and museum displays, but this is not invariably observed.

The form of currency follows its function, which is to serve as a readily accepted medium of exchange of value. Normally, this function rests on a state as guarantor of the value: either as trustworthy guarantor of the kind and amount of metal in a coin, or as powerful guarantor of the continuing acceptance of token coins.

Traditionally, most states have been monarchies where the person of the monarch and the state were equivalent for most purposes. For this reason, the obverse side of a modern piece of currency is the one that evokes that reaction by invoking the strength of the state, and that side almost always depicts a symbol of the state, whether it be the monarch or otherwise.

If not provided for on the obverse, the reverse side usually contains information relating to a coin's role as medium of exchange (such as the value of the coin). Additional space typically reflects the issuing country's culture or government, or evokes some aspect of the state's territory.

Coins of the European Union

National side (obverse) of a Lithuanian €2 coin

Regarding the euro, some confusion regarding the obverse and reverse of the euro coins exists. Officially, as agreed by the informal Economic and Finance Ministers Council of Verona in April 1996, and despite the fact that a number of countries have a different design for each coin, the distinctive national side for the circulation coins is the obverse and the common European side (which includes the coin value) is the reverse. This rule does not apply to the collector coins as they do not have a common side.

A number of the designs used for obverse national sides of euro coins were taken from the reverse of the nations' former pre-euro coins. Several countries (such as Spain and Belgium) continue to use portraits of the reigning monarch; while the Republic of Ireland continues to use the State Arms, as on its earlier issues.

In Japan, from 1897 to the end of World War II, the following informal conventions existed:

The Chrysanthemum Crest was no longer used after the war, and so (equally informally):

Coins of the United Kingdom

A left-facing portrait of Edward VIII would have broken tradition.

Following ancient tradition, the obverse of coins of the United Kingdom (and predecessor kingdoms going back to the middle ages) almost always feature the head of the monarch.

By tradition, each British monarch faces in the opposite direction of his or her predecessor; this is said to date from 1661, with Charles II turning his back on Oliver Cromwell. Hence, George VI faced left and the present Queen faces right. The only break in this tradition almost occurred in 1936 when Edward VIII, believing his left side to be superior to his right, insisted on his image facing left, as his father's image had. No official legislation prevented his wishes being granted, so left-facing obverses were prepared for minting. Very few examples were struck before he abdicated later that year, but none bearing this portrait ever were issued officially. When George VI acceded to the throne, his image was placed to face left, implying that, had any coins been minted with Edward's portrait the obverses would have depicted Edward facing right and maintained the tradition.

Current UK coinage features the following abbreviated Latin inscription: D(ei) G(ratia) REG(ina) F(idei) D(efensor) (By the Grace of God, Queen Defender of the Faith). Earlier issues, before 1954, included BRITT(anniarum) OMN(ium) (of all the Britains – that is, Britain and its dominions) and before 1949 IND(iae) IMP(erator) (Emperor of India).

Coins of the United States

The United States specifies what appears on the obverse and reverse of its currency. The specifications mentioned here imply the use of all upper-case letters, although they appear here in upper and lower case letters for the legibility of the article.

US dollar coin, with the obverse side showing Susan B. Anthony, the words "Liberty" and "In God We Trust", and the year 1979; the reverse side shows the words "One Dollar", "United States of America", and "E Pluribus Unum", and an eagle carrying a laurel branch.

The United States government long adhered to including all of the following:

The ten-year series of Statehood Quarters, whose issue began in 1999, was seen as calling for more space and more flexibility in the design of the reverse. A law specific to this series and the corresponding time period permits the following:

All content from Kiddle encyclopedia articles (including the article images and facts) can be freely used under Attribution-ShareAlike license, unless stated otherwise. Cite this article:
Obverse and reverse Facts for Kids. Kiddle Encyclopedia.