Susan B. Anthony facts for kids

Public perception of her changed radically during her lifetime, however. Her 80th birthday was celebrated in the White House at the invitation of President William McKinley. She became the first female citizen to be depicted on U.S. coinage when her portrait appeared on the 1979 dollar coin. 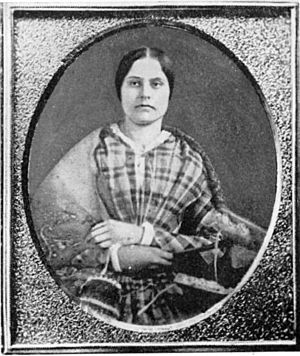 Susan Anthony was born on February 15, 1820, to Daniel Anthony and Lucy Read in Adams, Massachusetts, the second-oldest of seven children. She was named for her maternal grandmother Susanah, and for her father's sister Susan. In her youth, she and her sisters responded to a "great craze for middle initials" by adding middle initials to their own names. Anthony adopted "B." as her middle initial because her namesake aunt Susan had married a man named Brownell. Anthony never used the name Brownell herself, and did not like it.

Her family shared a passion for social reform.

When Anthony was six years old, her family moved to Battenville, New York, where her father managed a large cotton mill. Previously he had operated his own small cotton factory.

When she was seventeen, Anthony was sent to a Quaker boarding school in Philadelphia, where she unhappily endured its severe atmosphere. She was forced to end her studies after one term because her family was financially ruined during an economic downturn known as the Panic of 1837. They were forced to sell everything they had at an auction, but they were rescued by her maternal uncle, who bought most of their belongings and restored them to the family. To assist her family financially, Anthony left home to teach at a Quaker boarding school.

In 1845, the family moved to a farm on the outskirts of Rochester, New York, purchased partly with the inheritance of Anthony's mother. There they associated with a group of Quaker social reformers who had left their congregation because of the restrictions it placed on reform activities, and who in 1848 formed a new organization called the Congregational Friends. The Anthony farmstead soon became the Sunday afternoon gathering place for local activists, including Frederick Douglass, a former slave and a prominent abolitionist who became Anthony's lifelong friend. 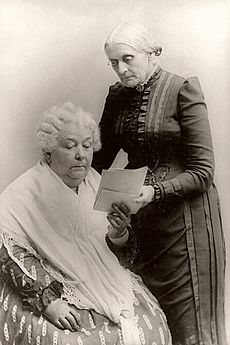 Born into a Quaker family committed to social equality, she collected anti-slavery petitions at the age of 17. In 1856, she became the New York state agent for the American Anti-Slavery Society.

In 1851, she met Elizabeth Cady Stanton, who became her lifelong friend and co-worker in social reform activities, primarily in the field of women's rights. When she first began campaigning for women's rights, Anthony was harshly ridiculed and accused of trying to destroy the institution of marriage.

In 1852, they founded the New York Women's State Temperance Society after Anthony was prevented from speaking at a temperance conference because she was female. In 1863, they founded the Women's Loyal National League, which conducted the largest petition drive in United States history up to that time, collecting nearly 400,000 signatures in support of the abolition of slavery.

In 1866, they initiated the American Equal Rights Association, which campaigned for equal rights for both women and African Americans.

In 1868, they began publishing a women's rights newspaper called The Revolution.

In 1872, Anthony was arrested for voting in her hometown of Rochester, New York, and convicted in a widely publicized trial. Although she refused to pay the fine, the authorities declined to take further action.

In 1878, Anthony and Stanton arranged for Congress to be presented with an amendment giving women the right to vote. Introduced by Sen. Aaron A. Sargent (R-CA), it later became known colloquially as the Susan B. Anthony Amendment. It was eventually ratified as the Nineteenth Amendment to the U.S. Constitution in 1920.

Anthony traveled extensively in support of women's suffrage, giving as many as 75 to 100 speeches per year and working on many state campaigns. She worked internationally for women's rights, playing a key role in creating the International Council of Women, which is still active. She also helped to bring about the World's Congress of Representative Women at the World's Columbian Exposition in Chicago in 1893. 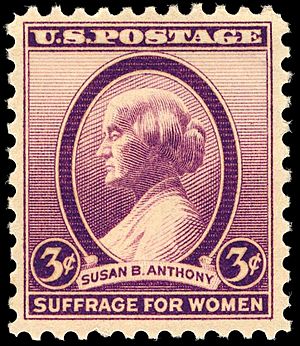 Commemorative stamp of Susan B. Anthony issued in 1936. 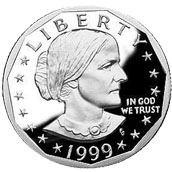 U.S. dollar coin with image of Susan. B. Anthony

The first memorial to Anthony was established by African Americans. In 1907, a year after Anthony's death, a stained-glass window was installed at the African Methodist Episcopal Zion church in Rochester that featured her portrait and the words "Failure is Impossible", a quote from her that had become a watchword for the women's suffrage movement. It was installed through the efforts of Hester C. Jeffrey, the president of the Susan B. Anthony Club, an organization of African American women in Rochester. Speaking at the window's dedication, Jeffrey said, "Miss Anthony had stood by the Negroes when it meant almost death to be a friend of the colored people." This church had a history of involvement in issues of social justice: in 1847, Frederick Douglass printed the first editions of The North Star, his abolitionist newspaper, in its basement.

Anthony is commemorated along with Elizabeth Cady Stanton and Lucretia Mott in a sculpture by Adelaide Johnson at the United States Capitol, unveiled in 1921. Originally kept on display in the crypt of the US Capitol, the sculpture was moved to its current location and more prominently displayed in the rotunda in 1997.

In 1922, sculptor Leila Usher donated a bas-relief of Susan B. Anthony to the National Woman's Party, which was installed at their headquarters near Washington, DC. Usher was also responsible for the creation of a similar bronze medallion donated to Bryn Mawr College in 1901.

In 1950, she was inducted into the Hall of Fame for Great Americans; a bust of her was placed there in 1952 that had been sculpted by Brenda Putnam.

New York Radical Feminists, founded in 1969, was organized into small cells or "brigades" named after notable feminists of the past; Anne Koedt and Shulamith Firestone led the Stanton-Anthony Brigade.

Since 1970, the Susan B. Anthony Award is given annually by the NYC chapter of the National Organization for Women to honor "grassroots activists dedicated to improving the lives of women and girls in New York City."

In 1973, she was inducted into the National Women's Hall of Fame.

In 1979, the United States Mint began issuing the Susan B. Anthony dollar coin, the first US coin to honor a female citizen.

The artwork The Dinner Party, first exhibited in 1979, features a place setting for Anthony.

In 1999, Ken Burns and others produced the documentary Not for Ourselves Alone: The Story of Elizabeth Cady Stanton & Susan B. Anthony.

Also in 1999, a sculpture by Ted Aub was unveiled commemorating when on May 12, 1851, Amelia Bloomer introduced Anthony to Elizabeth Cady Stanton. This sculpture, called "When Anthony Met Stanton", consists of the three women depicted as life-size bronze statues, and is placed overlooking Van Cleef Lake in Seneca Falls, New York, where the introduction occurred.

In 2007, the Troup–Howell Bridge in Rochester, New York, was redesigned and renamed the Frederick Douglass–Susan B. Anthony Memorial Bridge.

The place where Anthony and other women led by her voted in 1872 now has a bronze sculpture of a locked ballot box flanked by two pillars, which is called the 1872 Monument, and was dedicated in August 2009, on the 89th anniversary of the Nineteenth Amendment. Leading away from the 1872 Monument there is the Susan B. Anthony Trail, which runs beside the 1872 Café, named for the year of Anthony's vote. Nearby is the "Let’s Have Tea" sculpture of Anthony and Frederick Douglass.

The US Treasury Department announced on April 20, 2016, that an image of Anthony would appear on the back of a newly designed $10 bill along with Lucretia Mott, Sojourner Truth, Elizabeth Cady Stanton and Alice Paul. The original plan was for a woman to appear on the front of the $10 bill, with Anthony under consideration for that position. The final plan, however, calls for Alexander Hamilton, the first US Secretary of the Treasury, to retain his current position there. Designs for new $5, $10 and $20 bills will be unveiled in 2020 in conjunction with the 100th anniversary of American women winning the right to vote via the 19th Amendment.

In 2016, Lovely Warren, the mayor of Rochester, put a red, white and blue sign next to Anthony's grave the day after Hillary Clinton obtained the nomination at the Democratic National Convention; the sign stated, "Dear Susan B., we thought you might like to know that for the first time in history, a woman is running for president representing a major party. 144 years ago, your illegal vote got you arrested. It took another 48 years for women to finally gain the right to vote. Thank you for paving the way." The city of Rochester put pictures of the message on Twitter and requested that residents go to Anthony's grave to sign it.

Anthony's home in Rochester is now a National Historic Landmark called the National Susan B. Anthony Museum and House. The house of her birth in Adams, Massachusetts, and her childhood home in Battenville, New York, are listed on the National Register of Historic Places.

In 2001, the Cathedral of St. John the Divine in Manhattan, one of the world's largest, added a sculpture honoring Anthony and three other heroes of the twentieth century: Martin Luther King Jr., Albert Einstein, and Mahatma Gandhi.

Susan B. Anthony Day is a commemorative holiday to celebrate the birth of Anthony and women's suffrage in the United States. The holiday is February 15—Anthony's birthday.

On February 15, 2020, Google celebrated her 200th birthday with a Google Doodle.

On August 18, 2020, President Donald Trump pardoned Anthony for her arrest in 1872 after she voted, when it was still illegal for women to vote. The announcement was made on the 100th anniversary of the Nineteenth Amendment to the United States Constitution giving women the right to vote. The president of the National Susan B. Anthony Museum and House wrote to "decline" the offer of a pardon on the principle that, to accept a pardon would wrongly "validate" the trial proceedings in the same manner that paying the $100 fine would have.

All content from Kiddle encyclopedia articles (including the article images and facts) can be freely used under Attribution-ShareAlike license, unless stated otherwise. Cite this article:
Susan B. Anthony Facts for Kids. Kiddle Encyclopedia.