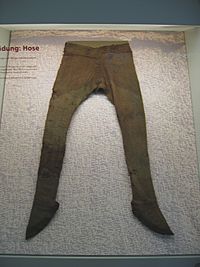 Germanic trousers of the 4th century found in the Thorsberg moor, Germany 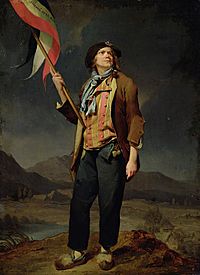 Early use of trousers in France: a sans-culotte by Louis-Léopold Boilly.

Trousers (or pants in Canada, South Africa and the United States), are a kind of clothing. They are worn on the lower part of the body, to cover both legs apart (instead of cloth stretching across both as in skirts and dresses).

Historically, in the West, trousers have been the lower-body clothing item for men since the 16th century; by the late 20th century, they were used sometimes by women as well. Trousers are worn at the hips or waist, and may be held up by their own by a belt, or braces (suspenders).

All content from Kiddle encyclopedia articles (including the article images and facts) can be freely used under Attribution-ShareAlike license, unless stated otherwise. Cite this article:
Trousers Facts for Kids. Kiddle Encyclopedia.