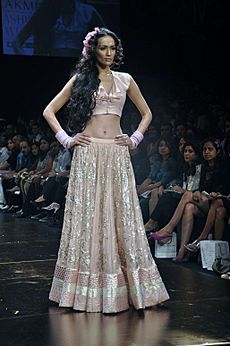 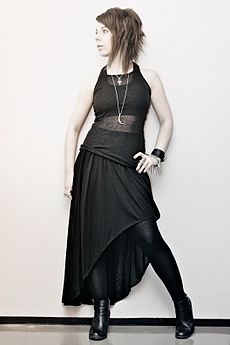 A skirt is a piece of clothing that hangs downwards from the waist. Different skirts have been worn in many different cultures at different times. There are skirts that are clothing for women, for men, or for both.

In modern Western / European culture skirts are usually worn by women. An exception is the kilt and the fustanella, which are traditional skirts for men that are still worn today.

Skirts are worn at semi-formal occasions, and sometimes at formal events, although a dress is more common. 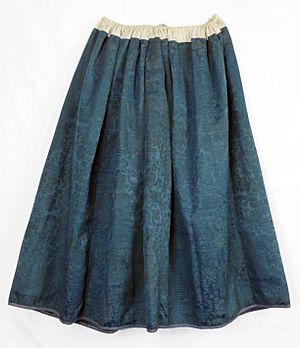 A full skirt of blue damask (back). Ethnographic region: Żywiec. Collection of The State Ethnographic Museum in Warsaw. 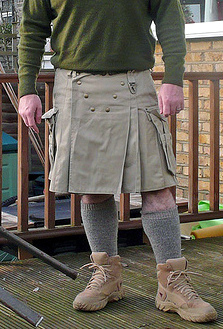 There are a number of garments marketed to men which fall under the category of "skirt" or "dress". These go by a variety of names and form part of the traditional dress for men from various cultures. Usage varies – the dhoti is part of everyday dress on the Indian subcontinent while the kilt is more usually restricted to occasional wear and the fustanella is used almost exclusively as costume. Robes, which are a type of dress for men, have existed in many cultures, including the Japanese kimono, the Chinese cheongsam, the Arabic thobe, and the African Senegalese kaftan. Robes are also used in some religious orders, such as the cassock in Christianity and various robes and cloaks that may be used in pagan rituals. Examples of men's skirts and skirt-like garments from various cultures include:

Aside from the wearing of kilts, in the Western world skirts, dresses, and similar garments are generally viewed exclusively women's clothing which, historically, was not always the case. However, Western men have taken up skirts as forms of civil protest. Other Western men advocate skirts as a measure of co-equality between women and men.

All content from Kiddle encyclopedia articles (including the article images and facts) can be freely used under Attribution-ShareAlike license, unless stated otherwise. Cite this article:
Skirt Facts for Kids. Kiddle Encyclopedia.