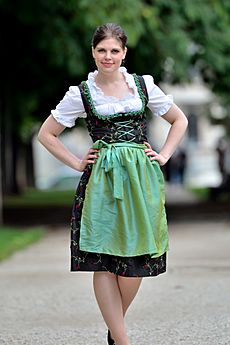 A woman wearing a dirndl 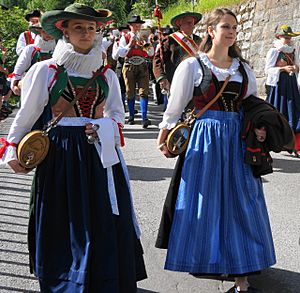 A dirndl [ˈdɪʁndl̩] is a type of dress worn by women in Germany, Switzerland, Liechtenstein, Austria and South Tyrol. It is made to look like the traditional clothing that peasants from the Alps used to wear. Originally the term Dirndl meant girl in Bavarian. Now it can mean either the dress or a girl. It was also called a Dirndlgewand. In the 1800s servant girls wore a very similar dress. They were very plain. A heavy, often dark colored dress was worn in winter. It had a long sleeve dirndl blouse and thick apron to go with it. In summer a light version was worn. Summer dresses were worn with a short puffed-sleeve dirndl blouse. Different styles were worn in different regions. The bow on the apron is tied on the left (she is single) or the right side (she is not single).

All content from Kiddle encyclopedia articles (including the article images and facts) can be freely used under Attribution-ShareAlike license, unless stated otherwise. Cite this article:
Dirndl Facts for Kids. Kiddle Encyclopedia.