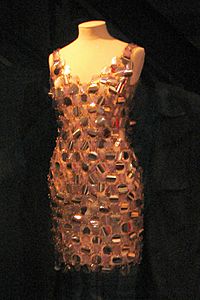 A cocktail dress decorated with metal discs by Paco Rabanne, 1967

The mini-skirt, or miniskirt, is a skirt well above the knees. If the top and skirt are all-in-one, then it is a minidress. Microskirts are extremely brief, and usually worn only for publicity events.

Mini-skirts were invented by Mary Quant, who also invented, or promoted, hot pants. There is disagreement as to who came up with the idea first; some say André Courrèges or John Bates. The short- and ever-shorter skirt was evolving already among fashion-minded young women: the designers who adapted it just helped spread the style. In Quant's case, she gave it the name. Mary Quant named the mini-skirt after her favorite make of car, the Mini. She loved the car so much, she had one designed especially for her.

All content from Kiddle encyclopedia articles (including the article images and facts) can be freely used under Attribution-ShareAlike license, unless stated otherwise. Cite this article:
Mini-skirt Facts for Kids. Kiddle Encyclopedia.