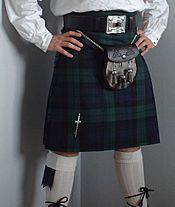 A kilt in the Black Watch tartan.

A kilt is a ceremonial article of clothing worn in Scotland. It is made of a thick, woven fabric with a tartan (checkered) pattern. It resembles a pleated skirt except that it is worn by men. It is still worn during ceremonies by some Scottish and Canadian military units and by people who play the bagpipes (a Scottish wind instrument). It is also quite commonly worn by men at weddings.

It is first recorded in the 16th century as the great kilt, a full-length garment whose upper half could be worn as a cloak. The small kilt or modern kilt emerged in the 18th century, and is essentially the bottom half of the great kilt. Since the 19th century, it has become associated with the wider culture of Scotland, and more broadly with Gaelic or Celtic heritage. It is most often made of woollen cloth in a tartan pattern.

Although the kilt is most often worn on formal occasions and at Highland games and sports events, it has also been adapted as an item of informal male clothing in recent years, returning to its roots as an everyday garment. Particularly in North America, kilts are now made for casual wear in a variety of materials. Kilts have also been adopted as female wear for some sports.

All content from Kiddle encyclopedia articles (including the article images and facts) can be freely used under Attribution-ShareAlike license, unless stated otherwise. Cite this article:
Kilt Facts for Kids. Kiddle Encyclopedia.