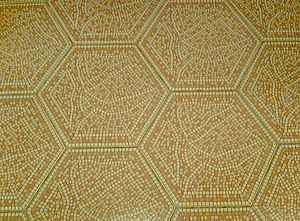 Hexagonal tiling of a floor in Rome. The tiling follows a simple pattern

A pattern is an idea, a concept or a model. The model is usually abstract, and can then be applied to the domain where it is used. Pattern matching is checking if a certain pattern is present. Many patterns can directly be recognised by the senses.

Some patterns are based on the fact that there are repetitions, that a certain thing occurs over and over again. An example of a simple pattern might be the tiling of a floor. For example, lots of bathrooms have a paisley or floral tiling pattern on the floor. In computer science, design patterns are model solutions for problems that occur often. Sometimes people see patterns when there are none. This is called pareidolia.

In Mathematics, there are many different patterns. For example, the Fibonacci sequence is a complex type of pattern. There are some simple ones like:

In this pattern, the next number is the product of the previous number multiplied by 2. Basically a mathematical pattern is a sequence of numbers which follows one rule.

All content from Kiddle encyclopedia articles (including the article images and facts) can be freely used under Attribution-ShareAlike license, unless stated otherwise. Cite this article:
Pattern Facts for Kids. Kiddle Encyclopedia.