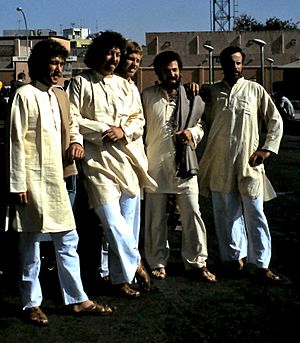 A group of Men in Traditional Indian Garment.

Dhoti is a white piece of cloth basically worn by Indian people. They have different ways be worn. In West Bengal their wearing style is known as koncha style. Nowadays people use them in occasional purposes. Earlier they were worn by rich zamindars of India. The Dhoti is a commonly worn national dress-code for Indian men.

All content from Kiddle encyclopedia articles (including the article images and facts) can be freely used under Attribution-ShareAlike license, unless stated otherwise. Cite this article:
Dhoti Facts for Kids. Kiddle Encyclopedia.