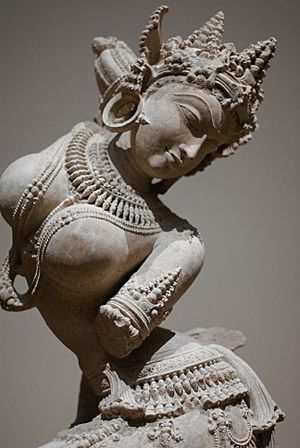 A 12th-century sandstone statue of an Apsara from Uttar Pradesh 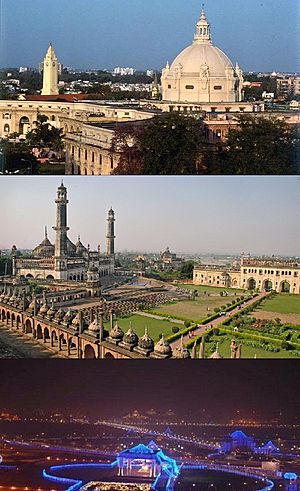 Uttar Pradesh (Hindi: उत्तर प्रदेश, Urdu: اتر پردیش) is a state in northern India. For short, people call it UP. Lucknow is the capital city of UP.

Uttar Pradesh has a long border with Nepal to the north. Next to it are also the Indian states of Uttarakhand, Himachal Pradesh, Haryana, Delhi, Rajasthan, Madhya Pradesh, Chhattisgarh, Jharkhand and Bihar. There are two geographical main regions:-

The climate of Uttar Pradesh is mostly subtropical. However weather conditions change a lot depending on where one lives and the season.

Rainfall: Rainfall is between 1,000 and 2,000 mm (40–80 inches) in the east and between 600 and 1,000 mm (24–40 inches) in the west. Most of the rain is due to the southwest monsoon. It lasts from June to September. Consequently, floods are a problem during those seasons. They badly damage crops and property.

Droughts: They occur when the monsoon does not come in the usual season. It leads to crop failure.

Snowfall: In the Himalayan region of the State it usually snows from 3 to 5 metres (10 to15 feet) between December and March. 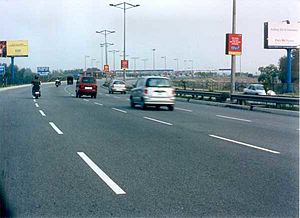 Railways: Almost all the major cities and even some smaller cities are linked. The state has the largest railway network in the country. Its total length is 8,546 km (2006). It has the sixth largest railway density.

Roadways: The state has the largest road network in the country. The biggest is Maharashtra. There are 31 National Highways (NH). In total they are of 4,942 km (8.5% of total NH length in India). It has the seventh highest road density in the India (1,027 km per 1000 km2 in 2002). It also has the largest surfaced urban road network in the country (50,721 km, as on 2002). Cities of Kanpur, Lucknow, Bareilly, Allahabad, Varanasi, Jhansi, Gorakhpur, Noida, Ghaziabad, Meerut, Mathura, Agra and Ghazipur are connected to many National Highways.

Waterways: The river Ganges - from Allahabad (Uttar Pradesh) to Haldia (West Bengal) - has been declared as National Waterway (NW)-I and 600 km of the total NW-I lies in Uttar Pradesh.

All content from Kiddle encyclopedia articles (including the article images and facts) can be freely used under Attribution-ShareAlike license, unless stated otherwise. Cite this article:
Uttar Pradesh Facts for Kids. Kiddle Encyclopedia.