Jhansi is a historic city in the Indian state of Uttar Pradesh. It lies in the region of Bundelkhand on the banks of the Pahuj River, in the extreme south of Uttar Pradesh. Jhansi is the administrative headquarters of Jhansi district and Jhansi division. Also called the Gateway to Bundelkhand, Jhansi is situated near and around the rivers Pahuj and Betwa at an average elevation of 285 m (935 ft). It is about 420 kilometres (261 mi) from New Delhi and 102 kilometres (63 mi) south of Gwalior.

Jhansi is well connected to all other major towns in Uttar Pradesh by road and railway networks. The National Highways Development Project has supported development of Jhansi. Jhansi is also being developed as the defense corridor by the NDA government which will boost the economy of the city and the region at the same time. Srinagar to Kanyakumari north–south corridor passes closely to Jhansi as does the east–west corridor; consequently there has been a sudden rush of infrastructure and real estate development in the city. Jhansi was adjudged the third cleanest city of Uttar Pradesh and the fastest moving city in the North Zone in Swachh Survekshan 2018 rankings. A greenfield airport development has been planned. On 28 August 2015, Jhansi was selected among 98 cities for smart city initiative by Government of India. 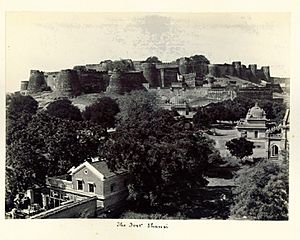 During ancient times, Jhansi was a stronghold of the Chandela Rajput kings and was known as Balwant Nagar. However, it lost importance in the 11th century after the decline of the Chandela dynasty. It rose in prominence in the 17th century when Raja Bir Singh Deo of Orchha State constructed the Jhansi Fort in 1613.

In the 18th century, the town of Jhansi served as the capital of a Maratha province and later the Princely State of Jhansi from 1804 till 1858, when the territory became a part of British India.

After the independence of India, Jhansi was included in the state of Uttar Pradesh

Jhansi is located at 25.4333 N 78.5833 E. It has an average elevation of 284 metres (935 feet). Jhansi lies on the plateau of central India, an area dominated by rocky relief and minerals underneath the soil. The city has a natural slope in the north as it is on the south western border of the vast Tarai plains of Uttar Pradesh and the elevation rises on the south. The land is suitable for species of citrus fruit and crops include wheat, pulses, peas, and oilseeds. The region relies heavily on Monsoon the rains for irrigation purposes. Under an ambitious canal project (the Rajghat canal), the government is constructing a network of canals for irrigation in Jhansi and Lalitpur and some part of Madhya Pradesh. The trade in agricultural products (including grain and oilseeds) is of great economic importance. The city is also a centre of brassware manufacture.

A view of Jhansi from the hill of Sipri)

Being on a rocky plateau, Jhansi experiences extreme temperatures. Winter begins in October with the retreat of the southwest monsoon (Jhansi does not experience any rainfall from the Northeast Monsoon) and peaks in mid-December. Temperatures are about 4 °C or 39.2 °F minimum and 21 °C or 69.8 °F maximum. Spring arrives by the end of February and is a short-lived phase of transition. Summer begins by April and summer temperatures can peak at 47 °C or 116.6 °F in May. The rainy season starts by the third week of June (although this is variable year to year), while the monsoon rains gradually weaken in September and end before the last week of September. In the rainy season, the average daily high temperature hovers around 36 °C or 96.8 °F with high humidity. The average rainfall for the city is about 850 millimetres or 33 inches per year, occurring almost entirely within the three-and-a-half months of the Southwest Monsoon. In summer Jhansi experiences temperatures as high as 45 to 47 °C (113.0 to 116.6 °F) degrees while in winter the temperatures can fall as low as 0 to 1 °C (32.0 to 33.8 °F) as recorded in winter 2011.

The Jhansi urban agglomeration had a population of 547,638 which also included Jhansi Cantonment and Jhansi Railway Settlement. 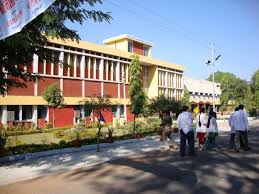 In October 2009, the Union health ministry gave approvals for setting up an institute equivalent to AIIMS, the first in Bundelkhand region and developing central agriculture university. 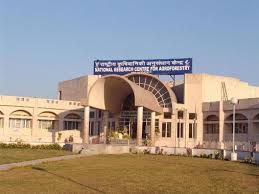 The city is connected to other parts of India by railways and major highways. 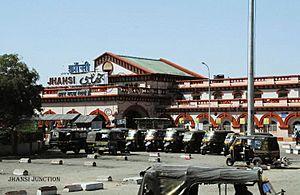 Jhansi has its own division in the North Central Railway zone of Indian Railways. It lies on the main Delhi-Chennai and Delhi-Mumbai lines. The station code is JHS. 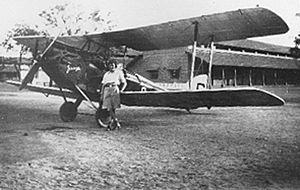 Jhansi Airport is a military aviation base built in the British era used by the Indian army and political visitors. Though there are provisions for private aircraft to land, there are no civil aviation operations. There had been a demand to make it operational for commercial purposes in the 1990s and again in the 2000s. The Uttar Pradesh government announced the construction of an all new civil aviation base to support tourism in Bundelkhand in April 2011. As of 2020, the Kanpur Airport, located 228 km (142 mi) away, is the nearest major airport to Jhansi within the state, though Gwalior Airport in the neighbouring state of Madhya Pradesh is the nearest airport being located 102 km (63 mi) from Jhansi.

The Jhansi Cantonment was the site of the accommodation for British civil and military personnel in the period of British rule in India. Jhansi district is the headquarters of the 31st Indian Armoured Division, stationed at Jhansi-Babina. There has been a joint exercise from 1 to 30 March 2012 with the Singaporean Army at Jhansi witnessed by the President of India, Pratibha Patil.

Amar Ujala, Dainik Jagran, Patrika, and Dainik Bhaskar are some of the newspapers with online news services.

Many national and local newspapers are published in Jhansi in Hindi, Urdu and English:

All content from Kiddle encyclopedia articles (including the article images and facts) can be freely used under Attribution-ShareAlike license, unless stated otherwise. Cite this article:
Jhansi Facts for Kids. Kiddle Encyclopedia.