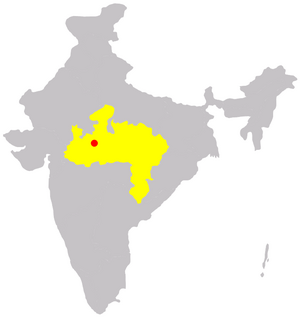 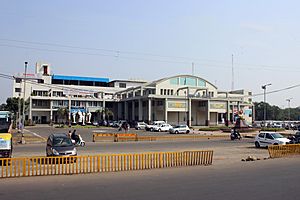 Bhopal is the capital of Madhya Pradesh, India, and the second largest city of the state, after Indore. Bhopal is also called the City of Lakes. It is the headquarters of Bhopal District. It is in the central part of India.

The city is believed to have first been called Bhojpal, named after the King of Bhoj. According to this theory, it was later changed to Bhopal.

In 1984 a poisoned gas was leaked from a private chemical factory at night when a worker was cleaning out a clogged pipe connected with a tank containing gas. The tank had 42 tons of methyl isocyanate (MIC) that was leaked at midnight and leaving more than 5,000 people and animals dead. Many people also became sick and they are still suffering from deadly diseases. This has been called as "World's worst industrial disaster".

All content from Kiddle encyclopedia articles (including the article images and facts) can be freely used under Attribution-ShareAlike license, unless stated otherwise. Cite this article:
Bhopal Facts for Kids. Kiddle Encyclopedia.