The Indian Space Research Organisation is the agency of India that deals with space exploration and astronomy. Also known as ISRO, the organisation has mad many successes since its creation in 1969. It built and launched the Mars Orbiter Mission which made India the first country to get to Mars on its first try.

Organised research about space in India was led by two scientists: Vikram Sarabhai and Homi Bhaba. Bhaba was the secretary of the Department of Atomic Energy when it was founded in 1950. He supported Sarabhai in creating India's first rocket launch station. In 1962, the Indian National Committee for Space Research was set up by India's first prime minister, Jawaharlal Nehru. In 1969, ISRO was created to follow INCOSPAR.

Like other space programs, ISRO has had many successes and failures. In the beginning, ISRO built satellites that were then launched by other countries, like the Soviet Union. Later, ISRO built many types of rockets. Some of those rockets are now decommissioned, meaning ISRO does not use them anymore. In the future, India also wants to send people to space and send more missions to other planets. 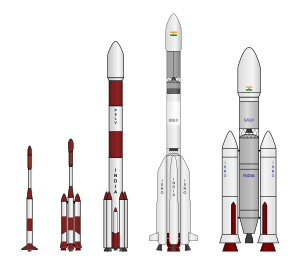 During the 1960s and 1970s India began its own rocket program. ISRO has had five different types of rockets.

The Satellite Launch Vehicle was a 4-stage solid-propellant light launcher. It was supposed to be 500 kilometres (310 miles) tall and be able to carry 40 kilograms (88 pounds). The first launch was in 1979 and launched every year until 1983. It launched successfully for the first time on July 18, 1980. This means that India is the sixth country to get spaceflight by itself. It is now decomissioned.

The Augmented Satellite Launch Vehicle was a five-stage solid propellant rocket. It was able to carry 150 kilograms (330 pounds) into low Earth orbit. The design was based on the SLV and the project started in the 1980s. The rocket was tested in 1987, 1988, 1992, and 1994 and only two of them were successful. It is now decommissioned.

The Polar Satellite Launch Vehicle uses an expendable launch system to carry things into space. It is still in use.

The Geosynchronous Satellite Launch Vehicle also uses an expendable launch system, this time to launch INSAT-type satellites. Currently it is India's second-heaviest launch vehicle and can launch up to 5,000 kilograms (11,000 pounds) into low Earth orbit. There are multiple marks, or versions of this rocket. It is still in use.

India's first satellite, which was called the Aryabhata, was launched by the Soviet Union. Since then India has built and launched many different satellites.

Rohini is a series of four satellites. These satellites were launched by the Satellite Launch Vehicle, and three of them were able to make it into orbit.

The Indian National Satellite System (INSAT) is a series of satellites built and launched by ISRO. These help India with telecommunications, broadcasting, meteorology, and search-and-rescue.

The South Asia Satellite is a communications satellite launched in 2017 as a gift to the other countries in the South Asian Association for Regional Cooperation.

Also known as GAGAN, this is a national plan for satellite navigation.

The Independent Regional Navigation Satellite System is made to have accurate position information to people in India as well as 1500 km from its borders. It is made like this because in bad situations, people cannot rely on GPS. ISRO first planned to launch the satellites between 2012 and 2014, but it had to be moved to later years. 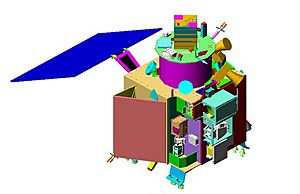 Chandrayaan-1 was India's first mission to the Moon. The robotic lunar exploration mission included a lunar orbiter and an impactor called the Moon Impact Probe.

It carried high-resolution remote sensing equipment for visible, near infrared, and soft and hard X-ray frequencies.

During its 312 days operational period (2 years planned), it surveyed the lunar surface to produce a complete map of its chemical characteristics and 3-dimensional topography. The polar regions were of special interest, as they possibly had ice deposits.

The Chandrayaan-166 team was awarded the American Institute of Aeronautics and Astronautics SPACE 2009 award, the International Lunar Exploration Working Group's International Co-operation award in 2008, and the National Space Society's 2009 Space Pioneer Award in the science and engineering category. 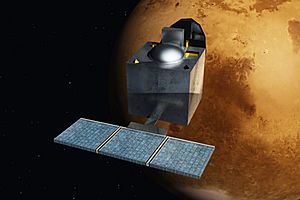 Artist's rendering of the Mars Orbiter Mission spacecraft, with Mars in the background.

The Mars Orbiter Mission (MOM), informally known as Mangalayaan, was launched into Earth orbit on 5 November 2013 by the Indian Space Research Organisation (ISRO) and has entered Mars orbit on 24 September 2014. India thus became the first country to enter Mars orbit on its first attempt. It was completed at a record low cost of $74 million.

The National Space Society awarded the Mars Orbiter Mission team the 2015 Space Pioneer Award in the science and engineering category. 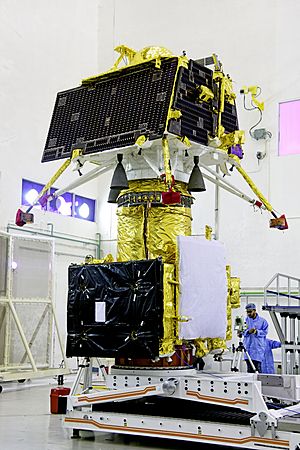 Vikram lander mounted on top of the Chandrayaan-2 orbiter.

Chandrayaan-2 is second mission to the Moon, which included an orbiter, a lander and a rover. Chandrayaan-2 was launched on a Geosynchronous Satellite Launch Vehicle Mark III (GSLV-MkIII) on 22 July 2019, consisted of a lunar orbiter, the Vikram lander, and the Pragyan lunar rover, all of which were developed in India. It is the first mission meant to explore the little-explored lunar south pole region. The main objective of the Chandrayaan-2 mission is to demonstrate ISRO's ability to soft-land on the lunar surface and operate a robotic rover on the surface. Some of its scientific aims are to conduct studies of lunar topography, mineralogy, elemental abundance, the lunar exosphere, and signatures of hydroxyl and water ice.

The Vikram lander, carrying the Pragyan rover, was scheduled to land on the near side of the Moon, in a south polar region at a latitude of about 70° south at approximately 1:50 am(IST) on 7 September 2019. However, the lander deviated from its intended trajectory starting from an altitude of 2.1 kilometres (1.3 mi), and telemetry was lost seconds before touchdown was expected. A review board concluded that the crash-landing was caused by a software glitch. The lunar orbiter was efficiently positioned in an optimal lunar orbit, extending its expected service time from one year to seven years. There will be another attempt for soft landing on moon at the end of 2020 or early 2021, but without an orbiter.

ISRO plans to launch a number of Earth observation satellites in the near future. It will also undertake the development of new launch vehicles, a crewed orbital vehicle (Gaganyaan), a space station and probes to Mars, Venus and near-Earth objects. In 2018, prime minister Narendra Modi said that India will send astronauts into space by 2022.

All content from Kiddle encyclopedia articles (including the article images and facts) can be freely used under Attribution-ShareAlike license, unless stated otherwise. Cite this article:
Indian Space Research Organisation Facts for Kids. Kiddle Encyclopedia.