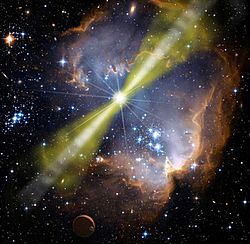 Artist's illustration of a bright gamma-ray burst occurring in a star-forming region. Energy from the explosion is beamed into two narrow, oppositely-directed jets.

Gamma-ray bursts (GRBs) are flashes of gamma rays from extremely energetic explosions. They have been seen in distant galaxies. They are the most luminous electromagnetic events known to occur in the universe.

Bursts can last from milliseconds to several minutes, although a typical burst lasts a few seconds. The initial burst is usually followed by a longer-lived 'afterglow' emitted at longer wavelengths (X-ray, ultraviolet, visible light, infrared and radio waves).

Most GRBs are a narrow beam of intense radiation released during a supernova, as a huge rapidly spinning star collapses to form a black hole. A subclass of GRBs (the 'short' bursts) seem to come from a different process, perhaps the merger of binary neutron stars.

The sources of most GRBs are billions of light years away from Earth. This suggests the explosions are extremely energetic: a typical burst releases as much energy in a few seconds as the Sun will in its entire 10 billion year lifetime. They are very rare (a few per galaxy per million years).

All observed GRBs have come from outside the Milky Way galaxy. Similar phenomena, soft gamma repeater flares, are associated with magnetars within the Milky Way. It has been suggested that a gamma-ray burst in the Milky Way could cause a mass extinction on Earth. No such case is known. 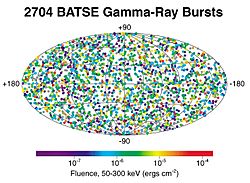 Positions on the sky of all gamma-ray bursts detected during the BATSE mission. The distribution is random, with no concentration towards the plane of the Milky Way, which runs horizontally through the center of the image.

Gamma-ray bursts were first observed in the late 1960s by the U.S. Vela satellites, which were built to detect gamma radiation pulses emitted by nuclear weapons tested in space.

On July 2, 1967, at 14:19 UTC, the Vela 4 and Vela 3 satellites detected a flash of gamma radiation unlike any known nuclear weapons signature. Uncertain what had happened but not considering the matter particularly urgent, the team at the Los Alamos Scientific Laboratory filed the data away for investigation.

By analyzing the different arrival times of the bursts as detected by different satellites, the team was able to determine rough estimates for the sky positions of sixteen bursts12-16 and definitively rule out a terrestrial or solar origin. The discovery was published in 1973.

Most observed events last longer than two seconds and are classified as long gamma-ray bursts. They have been studied in much greater detail than their short counterparts. Almost every well-studied long gamma-ray burst has been associated with a rapidly star-forming galaxy and in many cases a core-collapse supernova as well. This links long GRBs with the deaths of massive stars. Long GRB afterglow observations at high redshift (great distances) also suggest GRBs originate in star-forming regions. This is because observing distant galaxies is to look back in time to galaxies at an earlier stage.

Gamma-ray bursts are thought to be highly focused explosions, with most of the explosion energy in a narrow relativistic jet travelling at speeds over 99.995% of the speed of light.

The approximate angular width of the jet (that is, the degree of beaming) can be estimated directly by observing "jet breaks" in afterglow light curves: a time after which the slowly-decaying afterglow begins to fade suddenly, as the jet slows down and can no longer beam its radiation so effectively. Observations suggest significant variation in the jet angle from between 2 and 20 degrees.

Because their energy is strongly beamed (very narrow), the gamma rays emitted by most bursts miss the Earth and are never detected. When a gamma-ray burst is pointed towards Earth, the focusing of its energy along a relatively narrow beam causes the burst to appear much brighter than it would have been were its energy emitted spherically. When this effect is taken into account, typical gamma-ray bursts are observed to have a true energy release of about 1044 J, or about 1/2000 of a Solar mass energy equivalent.

This is comparable to the energy released in a bright type Ib/c supernova (sometimes called a 'hypernova'). Very bright supernovae have been seen at the position of some of the nearest GRBs.

All content from Kiddle encyclopedia articles (including the article images and facts) can be freely used under Attribution-ShareAlike license, unless stated otherwise. Cite this article:
Gamma-ray burst Facts for Kids. Kiddle Encyclopedia.