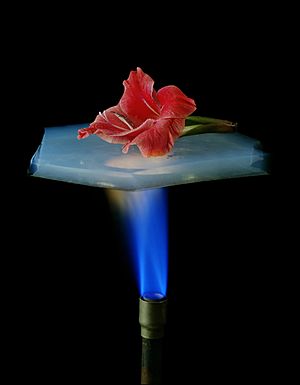 A piece of aerogel insulation protecting a flower from a torch.

Aerogel is a gel in which the liquid part has been replaced with a gas (usually air). It was invented in 1931 by Samuel Stephens Kistler. The most common type of aerogel is silica aerogel, which is made from the same molecule as glass. It is a solid material that is almost as light as air. It is the world's lightest material. Its melting point is 1200 degrees Celsius, which is comparable to crocidolite asbestos. Aerogel is the best thermal insulator available and can be used in construction in place of fiberglass insulation. It allows better insulation with less material, although it is much more expensive than fiberglass. It is also brittle, making it more difficult to install than fiberglass. Most aerogel is not water-resistant, and even small amounts of water can destroy it. It is also safer than fiberglass or asbestos because it is not known to cause cancer if inhaled into the lungs. Some aerogel insulation, however, contains fiberglass to increase its flexibility.

All content from Kiddle encyclopedia articles (including the article images and facts) can be freely used under Attribution-ShareAlike license, unless stated otherwise. Cite this article:
Aerogel Facts for Kids. Kiddle Encyclopedia.