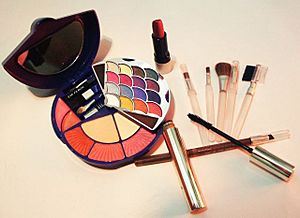 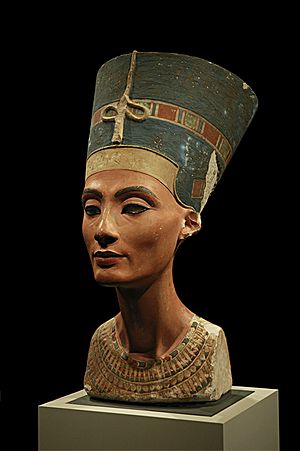 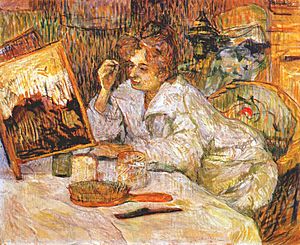 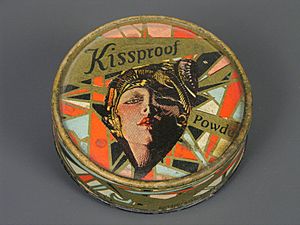 Cosmetics (also called makeup, make up, or make-up) are products used to make the human body look different. Often cosmetics are used to make someone more attractive to one person, or to a culture or sub-culture. In Western culture, women are the main users of cosmetics. Their use by men is less frequent, except on stage, television and film. Cosmetics are widely used in the world of acting.

All cosmetics are temporary. They need to be renewed after a certain time. Cosmetics include lipstick, powders (e.g. blush, eyeshadow), and lotions as well as other things.

Most cosmetic products and methods are intended to improve the look of the face. There are two categories: those which improve the basic quality of the skin, and those which sit on the skin during active social life.

Care and preparation of the skin

The purpose here is to clean the skin, improve its basic quality, and prepare it for the application of make-up. Products are of these types:

These are the cosmetics which the viewer actually sees on the face (or other parts of the body). They are some or all of these:

The word cosmetics comes from the Greek κοσμητικός (kosmētikos), "skilled in ordering or arranging".

Archaeological confirms use of cosmetics in ancient Egypt and Greece. Cosmetics used included:

All content from Kiddle encyclopedia articles (including the article images and facts) can be freely used under Attribution-ShareAlike license, unless stated otherwise. Cite this article:
Cosmetics Facts for Kids. Kiddle Encyclopedia.