Kids Encyclopedia Facts
This page is about a suburban area. For the electorate, see North Shore (New Zealand electorate).

North Shore is the part of the urban area of Auckland, New Zealand, located to the north of the Waitemata Harbour.

North Shore was formerly North Shore City, a distinct territorial authority district, which was governed by the North Shore City Council from 1989 until 2010, when it was incorporated into Auckland Council. The city had an estimated population of 229,000 at 30 June 2010, making it the fourth most populous city in New Zealand prior to the November 2010 reorganisation. The former city was also the country's fourth largest city in land, with an area of 129.81 square kilometres and a coastline of 141 kilometres. It was also the most densely populated city in the country because, unlike other New Zealand cities, most of the city's area was urban or suburban in character.

The North Shore comprises a large suburban area to the north of downtown Auckland; linked to the rest of the greater Auckland metropolitan area by two harbour bridges – the Auckland Harbour Bridge crosses the inner Waitemata Harbour to Auckland City, while the Upper Harbour Bridge provides a connection to Auckland's western suburbs Waitakere across the northern stretches of the harbour.

The administrative area of North Shore City Council was bounded by Rodney District to the north, Waitemata Harbour to the south and the Rangitoto Channel of the Hauraki Gulf to the east. The seat of the council was in Takapuna. The city was divided into three wards, Harbour, Northern and Central, and each ward is further divided into two community boards. Inner suburbs include Milford, Takapuna, Belmont, Devonport, Bayswater, Northcote, Birkenhead, Highbury, Hillcrest, Glenfield, Wairau Valley, Westlake and Forrest Hill. Outer suburbs include Birkdale, Beach Haven, North Harbour, Albany, Greenhithe, Long Bay*, Torbay*, Waiake*, Browns Bay*, Rothesay Bay*, Murrays Bay*, Mairangi Bay*, Campbells Bay*, Sunnynook and Castor Bay. Those here with an asterisk, along with several other beaches on the Hauraki Gulf coast, are collectively known as East Coast Bays.

The European history of the North Shore was initially dominated by very rural settlement, with people from the "main" Auckland generally venturing there only during weekends, when the beaches and many coastal settlements were favourite daytripper goals reached by the ferries connecting the North Shore to Auckland. By the 1950s, only about 50,000 people lived on the Shore, and its growth rate was still about half that of the areas south of the Waitemata, partly because few jobs were on offer.

This changed significantly with the construction of the Auckland Harbour Bridge in 1959, which opened up the Shore for Auckland expansion – vehicle volumes on the bridge became three times the forecast volume within the first decade – and began turning parts of it into a dormitory town for people working in the Auckland CBD or further south. Eventually the growth became significant enough for the North Shore to be considered a city in its own right, though densities remained (and remain as of the 2000s) still below what is typical south of the Harbour.

On 1 November 2010 the North Shore boundaries were amalgamated with the rest of the entire Auckland Region, and the North Shore City Council was abolished and replaced by a single unitary city authority. All council services and facilities are now under authority of the Auckland Council. 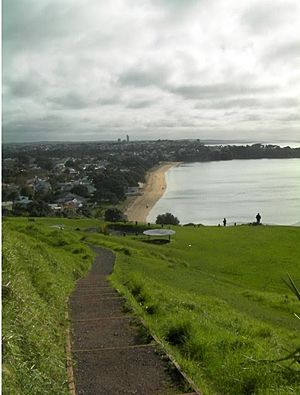 Commuting within the North Shore itself can be done relatively easily, but those who commute to Auckland City and need to cross the Auckland Harbour Bridge face severe traffic congestion. The alternative route through western suburbs is also prone to nose-to-tail traffic at peak times. As with the greater Auckland area, there has been much discussion regarding the problem at both national and local government levels, but very little concrete action, mostly related to the high cost and difficulty of providing additional crossings over the Waitemata Harbour. Several options for new bridges and tunnels have been studied in depth, but at the moment, the official position is to mitigate congestion effects instead of providing new infrastructure.

Public transport has been upgraded in an attempt to reduce the city's car dependence. The Northern Busway along the Northern Motorway, together with park and ride facilities in Albany and Constellation Drive (completed in late 2005), serves as the spine of a bus-based rapid transit system for North Shore and Hibiscus Coast citizens. In 2003, there were indications that the early stages of the busway project were generally regarded as a success but that important tasks regarding integration of bus lines were unresolved. The North Shore City Council increased the number of facilities with more park and ride stations in Sunnynook, Smales Farm and Akoranga park. These were completed in February 2008. In January 2009, the Northern Busway began trial runs featuring New Zealand's first "bus-dedicated roadway."

A number of North Shore suburbs have a regular ferry service to Auckland City, including Devonport, Stanley Bay, Bayswater, Birkenhead. Others are planned for Takapuna and Browns Bay. A plan to turn the city's streets into a venue for a three-day V8 supercar race has generated controversy; traffic experts were hired by the North Shore City Council to assess whether such a race was possible "without causing mayhem on the roads." 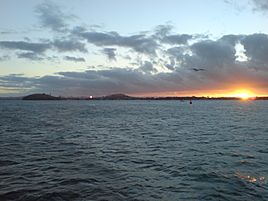 The southern Hauraki Gulf coast of the city

The racial makeup of the city was 67.5% European, 18.5% Asian, 6.3% Māori, 3.4% Pacific Islander, and 1.8% from the Middle East, Africa or Latin America. Just under 10% gave their ethnicity as "New Zealander", with most of this group having identified itself as European in former Census surveys.

A notable number of South African expatriates have made North Shore their home. Some estimates have them as 10% (or more) of the total population, with most residing in the East Coast Bays.

North Shore City was a sister city of:

All content from Kiddle encyclopedia articles (including the article images and facts) can be freely used under Attribution-ShareAlike license, unless stated otherwise. Cite this article:
North Shore, New Zealand Facts for Kids. Kiddle Encyclopedia.