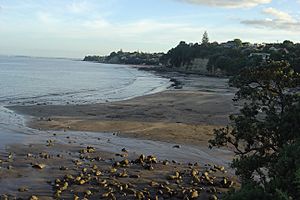 Looking down on Murrays Bay beach at low tide.

Murrays Bay is a small suburb in Auckland's East Coast Bays region. The suburb is roughly the same size as Rothesay Bay, the suburb to the immediate north. It is primarily a residential area but does have a community centre, restaurant and café. Murrays Bay is regularly serviced by buses which go to Takapuna and Auckland City.

Murrays Bay beach has a wharf that people jump off and fish in the Spring/Summer. There is a walkway to Rothesay Bay and Mairangi Bay. There is a sailing club that sails from the beach regularly.

All content from Kiddle encyclopedia articles (including the article images and facts) can be freely used under Attribution-ShareAlike license, unless stated otherwise. Cite this article:
Murrays Bay Facts for Kids. Kiddle Encyclopedia.