Takapuna is a suburb located on the North Shore of Auckland, New Zealand. The suburb is situated at the beginning of a south-east-facing peninsula forming the northern side of the Waitematā Harbour. While very small in terms of population, it was the seat of the North Shore City Council before amalgamation into Auckland Council in 2010 and contains substantial shopping and entertainment areas, acting as a CBD for the North Shore. 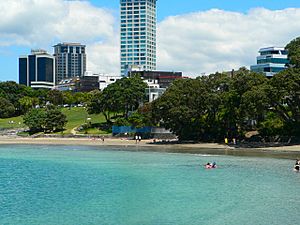 Takapuna from the water 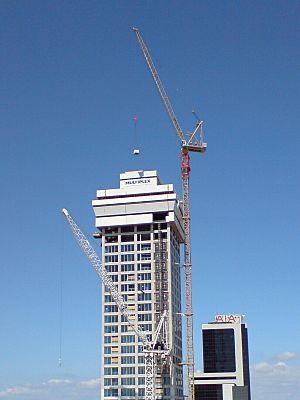 The Sentinel under construction.

Takapuna is located on the isthmus of a peninsula which extends south into the northern waters of the Waitemata at the harbour's eastern end. As such, the suburb has a coastline on Shoal Bay, an arm of the Waitemata to the southwest, as well as having a coast on the Hauraki Gulf to the northeast. The northern end of the suburb is dominated by the large volcanic crater of Lake Pupuke. Some points in Takapuna are less than 500 metres from all three of these bodies of water. The Hauraki coastline includes a kilometer long crescent shaped beach (Takapuna Beach) which is a popular recreation area for the local area.

To the southeast of Takapuna lies the six-kilometre-long peninsula which contains the suburbs of Belmont and Devonport. To the west lie the suburbs of Hillcrest and Northcote. The suburb of Milford lies to the north, on the far shore of Lake Pupuke.

The Māori place name Takapuna originally referred to a freshwater spring that flowed from the base of North Head into a swamp behind Cheltenham Beach. In 1841 the wife of Eruera Maihi Patuone sold 9500 acres of Auckland's North Shore to the Crown. Referred to as Takapuna Parish, the North Shore was surveyed and subdivided in 1844. In 1851 Governor Grey gifted back to Patuone 110 acres between the inlet beside Barry's Point Road and Takapuna Beach to use until his death (1872). This area included a Māori settlement known as Waiwharariki, on the small Shoal Bay headland now crossed by Esmonde Road.

The earliest subdivisions of farmland for suburban development were the "Hurstmere" estate in 1886 and the "Pupuke" Estate in 1889. The Takapuna and Milford Beach areas, as well as the land surrounding Lake Pupuke soon became popular spots for wealthy businessmen building summer homes to entertain in a rural surrounding, and eventually, many moved here permanently, commuting to work in Auckland via ferry.

A local history archive is maintained by the New Zealand Collection of Takapuna Public Library. It includes an index of the local newspapers, archives, photographs, oral histories, and historical material relating to Takapuna.

The Takapuna Beach area is a nightlife hub and boutique shopping centre of the North Shore, having many bars, restaurants, cafes and retail shops.

Shania Twain's 2003 music video for When You Kiss Me was also shot in Takapuna.

As a recognised area by council for future intensification, the beachfront will become the backyard for the estimated 15,000 residents and 15,000 employees who will inhabit Takapuna by 2040.

The area has potential in its central business area and wider precincts to further develop into the southern hub of the North Shore, and the council has recognised this potential in creating this forward-thinking planning framework for the area.

The Takapuna Beach area is a nightlife hub and boutique shopping centre of the North Shore, having many bars, restaurants, cafes and shops.

Shore City Shopping Centre opened in Takapuna in 1974. It covers 14,900 m2, and has 826 carparks and 63 shops, including Farmers, New World Metro and Les Mills.

The area has potential in its central business area and wider precincts to further develop into the southern hub of the North Shore.

The proportion of people born overseas was 42.7%, compared with 27.1% nationally.

Although some people objected to giving their religion, 47.5% had no religion, 41.5% were Christian, and 5.9% had other religions.

Takapuna is home to Takapuna AFC who compete in the Lotto Sport Italia NRFL Division 1A. Since 1974 Takapuna Rugby Football Club has been located at Onewa Domain, which is in the neighbouring suburb of Northcote. Prior to that the club were located at Taharoto Park which is located on Taharoto Rd in Takapuna.

Takapuna Grammar School is in Belmont, to the southeast of Takapuna. It is the main public secondary school in the area.

All content from Kiddle encyclopedia articles (including the article images and facts) can be freely used under Attribution-ShareAlike license, unless stated otherwise. Cite this article:
Takapuna Facts for Kids. Kiddle Encyclopedia.