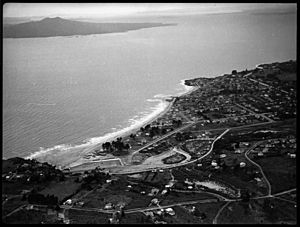 Milford is a suburb of Auckland, New Zealand's largest city. It is located on Auckland's North Shore on the northern side of Lake Pupuke. It also has a popular swimming beach, which runs some two kilometers from Black Rock in the south to Castor Bay in the north. The Wairau Creek empties into the Hauraki Gulf at the northern end of Milford Beach, and its lower tidal reaches host the Milford Marina.

The population of the "Lake Pupuke" statistical district, which is substantially the same as Milford, was 5,196 in the 2006 Census, an increase of 267 from 2001.

Milford is part of the North Shore electorate, which is currently represented by National MP Maggie Barry.

All content from Kiddle encyclopedia articles (including the article images and facts) can be freely used under Attribution-ShareAlike license, unless stated otherwise. Cite this article:
Milford, New Zealand Facts for Kids. Kiddle Encyclopedia.