The Auckland volcanic field is an area of monogenetic volcanoes covered by much of the metropolitan area of Auckland, New Zealand's largest city, located in the North Island. The approximately 53 volcanoes in the field have produced a diverse array of maars (explosion craters), tuff rings, scoria cones, and lava flows. No volcano has erupted twice, but eruptions lasted for various periods ranging from a few weeks to several years. The field is fuelled entirely by basaltic magma, unlike the explosive subduction-driven volcanism in the central North Island, such as at Mount Ruapehu and Lake Taupo. The field is currently dormant, but could become active again.

The field ranges from Lake Pupuke and Rangitoto Island in the north to Matukutururu (Wiri Mountain) in the south, and from Mount Albert in the west to Pigeon Mountain in the east.

The first vent erupted at Pupuke 193,200 ± 2,800 years ago. The most recent eruption (about 600 years ago and within historical memory of the local Māori) was of Rangitoto, an island shield volcano just east of the city, erupting 0.7 cubic kilometres of lava. The last volcano to erupt was much bigger than all others, with Rangitoto making up 41 per cent of the field's entire volume of erupted material. The field's volcanoes are relatively small, with most less than 150 metres (490 ft) in height.

Lake Pupuke, on the North Shore near Takapuna, is a volcanic explosion crater. A few similar craters such as Orakei Basin are open to the sea.

The field has produced voluminous lava flows that cover much of the Auckland isthmus. One of the longest runs from Mt Saint John northward, almost crossing the Waitematā Harbour to form Meola Reef. More than 50 lava tubes and other lava caves have been discovered, including the 290-metre (950 ft)-long Wiri Lava Cave. The second-longest individual cave in the Auckland field, some 270 metres (890 ft) in total length, is the Cave of a Thousand Press-ups to the east of Maungakiekie/One Tree Hill. Two impressive depressions caused by lava cave collapses are the Puka Street Grotto and the nearby Hochstetter Pond, also known as Grotto Street Pond, in Onehunga.

For most of the 200,000 years that the field has been erupting, the planet has been in glacial periods (ice ages) where sea levels were much lower due to water being locked up as ice, and the Waitemata and Manukau Harbours were dry land. All the volcanoes probably erupted on land except for Rangitoto, which erupted during the current interglacial (warmer) period. 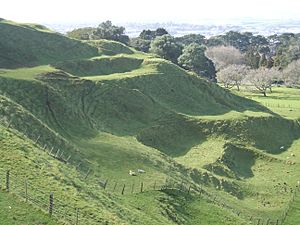 Terraces carved by Māori into the slopes of One Tree Hill

Many of the volcanic cones were occupied by substantial Māori pā (fortifications) before European settlement, and many terraces and other archeological remnants are still visible. Many of the cones have been levelled or strongly altered—in small part due to the historical Māori use, but mostly through relatively recent quarrying of construction materials (especially scoria). However several of the remaining volcanoes are now preserved as landmarks and parks. The cones are also protected by a 1915 law, the Reserves and Other Lands Disposal and Public Bodies Empowering Act 1915, which was passed due to early concern that the distinctive landscape was being eroded, especially by quarrying. While often ignored until the late 20th century, it has amongst other things minimised severe changes to Mount Roskill proposed by Transit New Zealand for the Southwestern Motorway.

In March 2007, New Zealand submitted the volcanic field, with several specifically named features, as a World Heritage Site candidate based on its unique combination of natural and cultural features. At that time, only 2 per cent of more than 800 World Heritage Sites worldwide were in this "mixed" category.

Since the field is not extinct, new volcanic events may occur at any time, though the usual period between events is, on average, somewhere between hundreds to thousands of years. However, the effects of such an event—especially a full-scale eruption—would be substantial, ranging from pyroclastic surges to earthquakes, lava bombs, ash falls, and the venting volcanic gas, as well as lava flows. These effects might continue for several months, potentially causing substantial destruction and disruption, ranging from the burial of substantial tracts of residential or commercial property, to the mid-to-long-term closures of major parts of the country's infrastructure such as the Port of Auckland, the State Highway network, or the Auckland Airport. It is possible that several volcanoes could erupt simultaneously. There is strong evidence that eight erupted within a span of 3000 years or so, between 31,000 and 28,000 years ago.

Various operative structures, plans and systems have been set up to prepare responses to volcanic activity within the urban areas, mainly coordinated in the 'Auckland Volcanic Field Contingency Plan' of the Auckland Regional Council, which provides a framework for interaction of civil defence and emergency services during an eruption. Auckland also has a seismic monitoring network comprising six seismometers—including one 250 metres (820 ft) deep at Riverhead—and three repeaters within the region that will detect the small tremors likely to precede any volcanic activity. This is likely to give between a few hours and several days' warning of an impending eruption, and its approximate location.

Auckland War Memorial Museum, itself built on the crater rim of Pukekawa, has an exhibition on the field, including the "Puia Street multi-sensory visitor experience", which simulates a grandstand view of an eruption in Auckland.

In 2013, scientists said new studies showed Rangitoto had been much more active in the past than previously thought, suggesting it had been active on and off for around 1000 years before the final eruptions around 550 years ago. Civil Defence officials said the discovery did not make living in Auckland any more dangerous, but did change their view of how an evacuation might proceed.

The volcanoes within the field are:

All content from Kiddle encyclopedia articles (including the article images and facts) can be freely used under Attribution-ShareAlike license, unless stated otherwise. Cite this article:
Auckland volcanic field Facts for Kids. Kiddle Encyclopedia.