Maungarei / Mount Wellington is a 135-metre volcanic peak located in the Auckland volcanic field of Auckland, New Zealand. It is the youngest onshore volcano of the Auckland volcanic field, having been formed by an eruption around 10,000 years ago. It is the largest of Auckland's scoria cones and has a near-circular base with a flattish rim and three small craters. It is situated in the Mount Wellington suburb of East Auckland.

Maungarei / Mount Wellington was used as a pā, and its flanks, particularly on the eastern side, are covered in food storage pits and terraced house sites. The pā was occupied from at least 1400AD onwards. 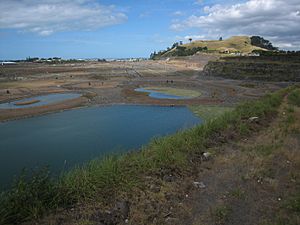 Much of the old lava flow surrounding the mountain has been quarried for industrial aggregates, and the large quarry to the north of the mountain once produced 7% of New Zealand's roading aggregate. The quarry has now closed and continues to be redeveloped for the Stonefields housing subdivision.

The name Maungarei is translated as "the watchful mountain" or "the mountain of Reipae". Reipae is a Tainui ancestress who travelled to Northland in the form of a bird. Mount Wellington was named by colonists after the Duke of Wellington.

In 1963, a 45,100-cubic-meter reservoir was constructed near the summit of the cone. The largest at the time, this reservoir is still the fourth largest in the city and is currently used to supply the Saint Johns reservoir as well as the suburbs of Glen Innes, Saint Johns, Saint Heliers, Kohimarama and Glendowie.

In the 2014 Treaty of Waitangi settlement with the Tamaki Makaurau Collective of 13 Auckland iwi, the volcano was officially named Maungarei / Mount Wellington and ownership was vested to the collective. It is now co-governed by the collective and Auckland Council in common benefit of the iwi "and all other people of Auckland".

In 2018 the summit of Mount Wellington / Maungarei became accessible to pedestrians only with a barrier installed across the access road. 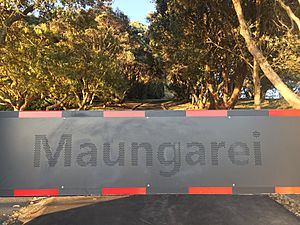 All content from Kiddle encyclopedia articles (including the article images and facts) can be freely used under Attribution-ShareAlike license, unless stated otherwise. Cite this article:
Maungarei Facts for Kids. Kiddle Encyclopedia.