Mount Albert is an inner suburb of Auckland, New Zealand, which is centred on Mount Albert, a local volcanic peak which dominates the landscape. In the past Mt Albert also referred to the 2,500 acre borough that was created in 1911 on the outskirts of Auckland City. Mt Albert was also one of the original five wards within the Mt Albert Borough. The suburb is located seven kilometres to the southwest of the Central Business District (CBD).

The peak, in parkland at the southern end of the suburb, is 135 metres in height, and is one of the many extinct cones which dot the city of Auckland, all of which are part of the Auckland volcanic field.

Mt Albert suburb was the second that developed in Auckland, after Remuera. It was mostly settled by well-off families in the late 1800s and early 1900s. Significant growth occurred between the two world wars. It is surrounded by the neighbouring suburbs of Owairaka, Sandringham, Morningside, Point Chevalier and Waterview. Its postcode is 1025.

Unitec Institute of Technology, a large tertiary educational college, is located towards the northern end of the suburb. The Mount Albert Research Centre (originally established by the DSIR) houses the Auckland centre of Plant & Food Research and other Crown Research Institutes. Fowlds Park lies in the northern area of Mt Albert.

Mount Albert has been part of the Mount Albert electorate since 1946, except for the 1996–99 term, when it was the Owairaka electorate. It is currently held by David Shearer of the Labour Party.

Mount Albert Council, prior to amalgamation, also had a Traffic Department responsible for enforcement of road traffic law and bylaws, attendance and investigation of vehicular collisions, driver licence testing and driver education programs. The Department consisted of a Chief Traffic Officer and 5 patrol officers. 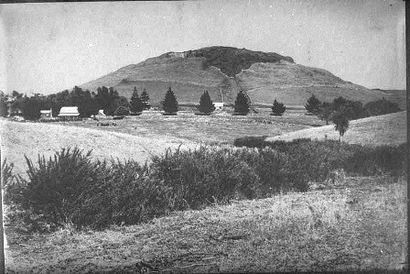 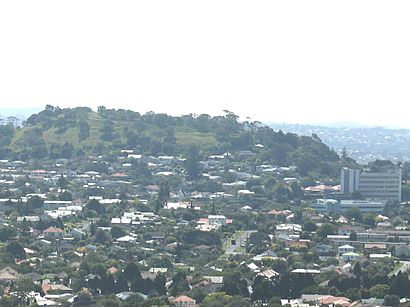 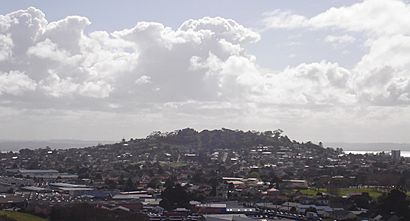 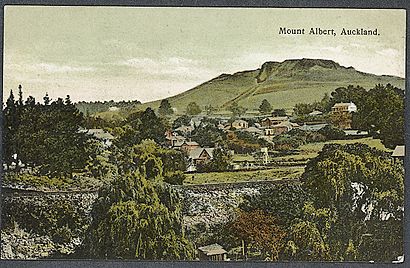 Mount Albert in a postcard from around 1910

New Zealand's greatest athlete, Sir Peter Snell (triple Olympic gold medalist and world mile record holder and NZ's athlete of the 20th century), was educated and a long-time resident of Mt Albert as was Bryan Williams, an All Black great and president of the NZRFU.

Mount Albert is home to both the Marist Saints and the Mount Albert Lions, who split from Marist in 1927. Both clubs compete in the Auckland Rugby League's top division, the Fox Memorial.

Mt Albert is well served by trains and buses, and is only 7 km from Auckland’s CBD. The railway station is centrally located, near the intersection of New North Road and Mt Albert/Carrington Road. Mount Albert Railway Station is a part of the Western Line; trains run regularly into the city and the western suburbs beyond.

The centre of all the shopping and business activities in the suburb of Mt Albert is New North Road, roughly between Richardson Road and Lloyd Avenue.

All content from Kiddle encyclopedia articles (including the article images and facts) can be freely used under Attribution-ShareAlike license, unless stated otherwise. Cite this article:
Mount Albert, New Zealand Facts for Kids. Kiddle Encyclopedia.