Typha orientalis, commonly known as bulrush or cumbungi, is a perennial herbaceous plant in the genus Typha. It is native to Australia, New Zealand, Malaysia, Indonesia, Japan, Korea, Mongolia, Myanmar, Philippines, China and the Russian Far East (Sakhalin and Primorye).

T. orientalis is a wetland plant that grows on the edges of ponds, lakes and slow flowing rivers and streams.

Known as raupō in New Zealand, the plant was quite useful to Māori. The rhizomes were cooked and eaten, while the flowers were baked into cakes. The leaves were used for roofs and walls and occasionally for canoe sails, as well as a material for making kites. Māori introduced the plant to the Chatham Islands. 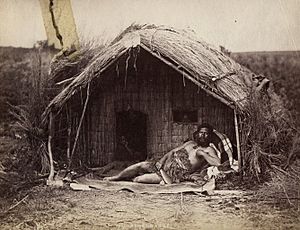 All content from Kiddle encyclopedia articles (including the article images and facts) can be freely used under Attribution-ShareAlike license, unless stated otherwise. Cite this article:
Typha orientalis Facts for Kids. Kiddle Encyclopedia.