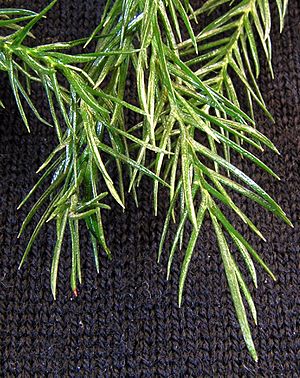 The tree comes from Norfolk Island, a small island in the South Pacific. It is part of the family of trees called Araucaria, which are found in South Pacific, mainly on the island of New Caledonia. It is a very old family of trees. It is listed a vulnerable tree, which means that it is in danger of dying out unless efforts are made to save it.

Captain James Cook was the first Europen to see the trees. He thought they would make good masts for ships. The British government sent people to live on Norfolk Island in 1788 to make sure that these trees would be kept for use by the Royal Navy.

All content from Kiddle encyclopedia articles (including the article images and facts) can be freely used under Attribution-ShareAlike license, unless stated otherwise. Cite this article:
Araucaria heterophylla Facts for Kids. Kiddle Encyclopedia.