They breathe through feather-like gills. Some species are found in brooks and streams where there is running fresh water, while others thrive in swamps, ditches, and paddy fields. Most crayfish cannot tolerate polluted water, although some species such as are hardier. Crayfish feed on living animals and plants, and detritus. There are about 150 crayfish species in North America, and over 540 species worldwide.

The body of a decapod crustacean, such as a crab, lobster, or prawn (shrimp), is made up of twenty body segments grouped into two main body parts, the cephalothorax and the abdomen. Each segment may possess one pair of appendages, although in various groups, these may be reduced or missing. On average, crayfish grow to 17.5 cm (6.9 in) in length. Walking legs have a small claw at the end.

The three families of crayfish 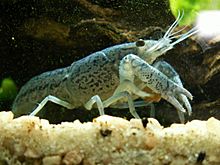 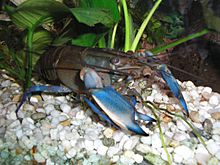 Three families of crayfish are described, two in the Northern Hemisphere and one in the Southern Hemisphere. The Southern Hemisphere (Gondwana-distributed) family Parastacidae, with 14 extant genera and two extinct genera, live(d) in South America, Madagascar, and Australasia. They are distinguished by the absence of the first pair of pleopods. Of the other two families, the three genera of the Astacidae live in western Eurasia and western North America, while the 15 genera of the family Cambaridae live in eastern Asia and eastern North America.

The greatest diversity of crayfish species is found in southeastern North America, with over 330 species

In 1983, Louisiana designated the crayfish, or crawfish as they are commonly called, as its official state crustacean. Louisiana produces 100 million pounds of crawfish per year with the red swamp and white river crawfish being the main species harvested.

Crawfish are a part of Cajun culture dating back hundreds of years. A variety of cottage industries have developed as a result of commercialized crawfish iconology. Their products include crawfish attached to wooden plaques, T-shirts with crawfish logos, and crawfish pendants, earrings, and necklaces made of gold or silver. 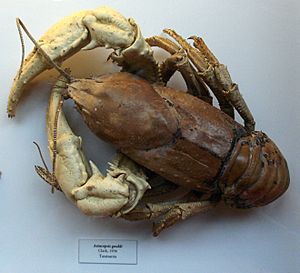 A dry specimen of Astacopsis gouldi, the Tasmanian giant freshwater crayfish, on display in the Oxford University Museum of Natural History.

Australia has over 100 species. It is home to the world's three largest freshwater crayfish:

Many of the better-known Australian crayfish are of the genus Cherax, and include the common yabby, western yabby, and red-claw crayfish.

The marron species is critically endangered, while other large Australasian crayfish are threatened or endangered.

In New Zealand, two species of Paranephrops are endemic, and are known by the Māori name kōura. 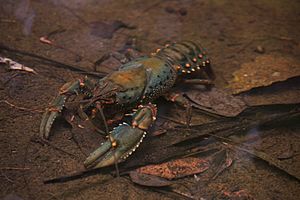 In Australia, New Zealand, and South Africa, the term "crayfish" or "cray" generally refers to a saltwater spiny lobster, of the genus Jasus that is indigenous to much of southern Oceania, while the freshwater species are usually called yabbies or kōura, from the indigenous Australian and Māori names for the animal, respectively, or by other names specific to each species. Exceptions include western rock lobster found on the west coast of Australia; the Tasmanian giant freshwater crayfish found only in Tasmania; and the Murray crayfish found along Australia's Murray River.

In Singapore, the term crayfish typically refers to Thenus orientalis, a seawater crustacean from the slipper lobster family. True crayfish are not native to Singapore, but are commonly found as pets, or as an invasive species in the many water catchment areas, and are alternatively known as freshwater lobsters.

Fossil records of crayfish older than 30 million years are rare, but fossilised burrows have been found from strata as old as the late Palaeozoic or early Mesozoic. The oldest records of the Parastacidae are in Australia, and are 115 million years old. 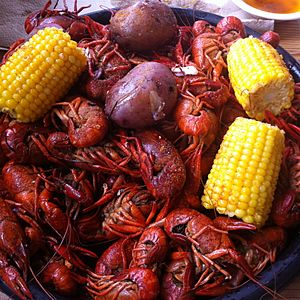 Crayfish, boiled with potatoes and corn 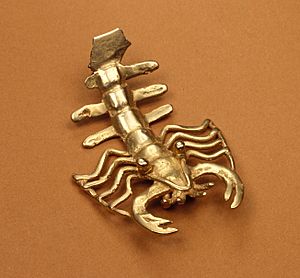 Crayfish are eaten worldwide. Like other edible crustaceans, only a small portion of the body of a crayfish is eaten. In most prepared dishes, such as soups, bisques and étouffées, only the tail portion is served. At crawfish boils or other meals where the entire body of the crayfish is presented, other portions, such as the claw meat, may be eaten. Like all crustaceans, crayfish are not kosher because they are aquatic animals that do not have both fins and scales. They are therefore not eaten by observant Jews.

Crayfish are preyed upon by a variety of ray-finned fishes, and are commonly used as bait, either live or with only the tail meat. They are a popular bait for catching catfish, largemouth bass, smallmouth bass, striped bass, perch, pike and muskie. When using live crayfish as bait, anglers prefer to hook them between the eyes, piercing through their hard, pointed beak which causes them no harm; therefore, they remain more active. 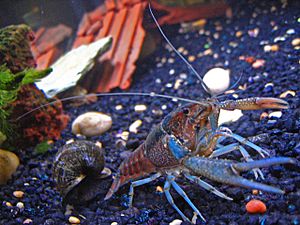 Crayfish are kept as pets in freshwater aquariums. They prefer foods like shrimp pellets or various vegetables, but will also eat tropical fish food, regular fish food, algae wafers, and small fish that can be captured with their claws.

In some nations, such as the United Kingdom, United States, Australia, and New Zealand, imported alien crayfish are a danger to local rivers. Crayfish may spread into different bodies of water because specimens captured for pets in one river are often released into a different catchment. There is a potential for ecological damage when crayfish are introduced into non-native bodies of water: e.g., crayfish plague in Europe, or the introduction of the common yabby (Cherax destructor) into drainages east of the Great Dividing Range in Australia.

Crayfish have been recorded as an invasive species from Louisiana to Europe to China. They have been known to consume local rice crops in China.

All content from Kiddle encyclopedia articles (including the article images and facts) can be freely used under Attribution-ShareAlike license, unless stated otherwise. Cite this article:
Crayfish Facts for Kids. Kiddle Encyclopedia.