Ditch for drainage in Netherlands 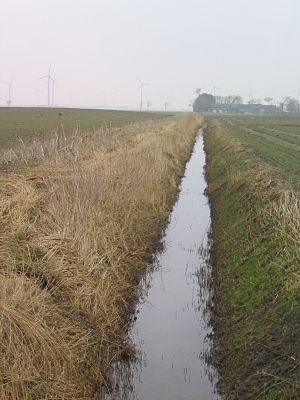 Ditch for drainage in northern Germany

A ditch is created to channel water and can be described as a small or moderate depression. A ditch can be used for drainage, to drain water from low lying areas, alongside roadways or fields, or to channel water from a more distant source for plant irrigation. A trench can be defined as a long narrow ditch.

Ditches are commonly seen around farmland, especially in areas that have required drainage, such as The Fens in the UK and the pro-water management The Netherlands.

Roadside ditches can provide a hazard to motorists, especially in poor weather conditions. 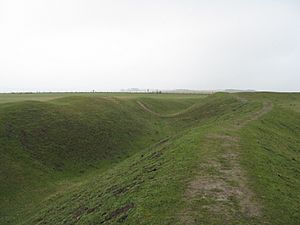 In military engineering and fortification, a distinction is made between a ditch and a trench. A ditch is a barrier, designed to slow down or break up an attacking force, while a trench is a cover, intended to provide protection to the defenders. In Medieval fortification, a ditch was often constructed in front of a defensive wall. When filled with water, such a defensive ditch is called a moat. Today ditches are of no importance as an obstacle for persons, but are still often used as anti-vehicle obstacles.

All content from Kiddle encyclopedia articles (including the article images and facts) can be freely used under Attribution-ShareAlike license, unless stated otherwise. Cite this article:
Ditch Facts for Kids. Kiddle Encyclopedia.