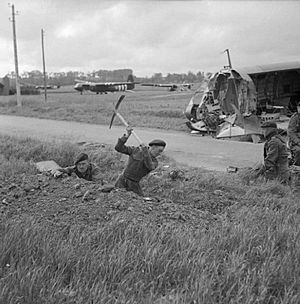 Soldiers digging a trench as cover

A trench is a long, narrow ditch. It is like a tiny valley.

Trench warfare has often been used in defense. Entrenched soldiers can be somewhat safe from enemy fire. Trench warfare made World War I longer than expected. The trench coat got its name from there.

All content from Kiddle encyclopedia articles (including the article images and facts) can be freely used under Attribution-ShareAlike license, unless stated otherwise. Cite this article:
Trench Facts for Kids. Kiddle Encyclopedia.