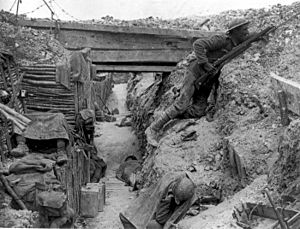 Trench warfare is a war tactic, or way of fighting. It was commonly used on the Eastern Front and the Western Front in the First World War.

In trench warfare, the two sides fighting each other dig trenches in a battlefield. These trenches have many different parts, such as bunks, headquarters, artillery, and machine gun bunks. Between the two trenches on a battlefield, there was an area called "no man's land". This area was often covered with barbed wire and land mines. Soldiers on either side would try to cross the no man's land to get to the enemy's trench and attack. Tanks were commonly used to cross this land.

Trench warfare was used because it gave soldiers cover while defending themselves against attack. It also gave soldiers bunks to sleep in, although the bunks were very unclean and uncomfortable.

World War I started in 1914 and ended in 1918. While fighting, soldiers needed self-defense. So, they dug holes. The holes were two meters deep. These holes were called trenches. All of the soldiers fought in the trenches. The trenches were not very far apart. For example, they could have been as short as thirty meters in between each trench. This open space was called Dead Man’s Land. Death was frequent, even when there was no fighting (for example, by diseases). This was called trench warfare.

Trench warfare was also an important part of the Iran-Iraq War.

Life in the trenches

The trenches were dirty. There were several diseases in the trenches. For example, "trench foot". Trench foot was a fungal disease. It rotted people’s feet off. This was because of the cold, wet, and unsanitary conditions. Lice spread throughout the trenches. This propelled a disease. This disease was called trench fever. It caused severe pain to the head. It also caused intense fevers. There were rats that invaded the trenches. The rats could have been brown or black. The brown rats were the really bad kind. The brown rats spread disease everywhere. The brown rats ate human remains. They could grow to be as big as cats. The mud was very thick. Some men disappeared into the mud because it was so thick. The trenches had a horrible smell. This was because of the lack of bathing, the dead bodies, and the overflowing toilets.

The first thing a new recruit would notice on the way to the Frontline was the smell of rotting bodies in shallow graves, men who had not washed in weeks because there were no facilities, overflowing cess pits, and creosol or chloride of lime used to stave off the constant threat of disease and infection. Cordite, the lingering odour of poison gas, rotting sandbags, stagnant mud, cigarette smoke, and cooking food. Although overwhelmed at first, new arrivals soon got used to it and eventually became part of the smell with their own body odour.

Front line trenches were usually about seven feet deep and six feet wide. The front of the trench was known as the parapet. The top two or three feet of the parapet and the parados (the rear side of the trench) would consist of a thick line of sandbags to absorb any bullets or shell fragments.

In a trench of this depth it was impossible to see over the top, so a two or three-foot ledge known as a fire-step, was added. Trenches were not dug in straight lines. Otherwise, if the enemy had a successive offensive, and got into your trenches, they could shoot straight along the line. Each trench was dug with alternate fire-bays and traverses.

Duck-boards were also placed at the bottom of the trenches to protect soldiers from problems such as trench foot. Soldiers also made dugouts and funk holes in the side of the trenches to give them some protection from the weather and enemy fire.

The front-line trenches were also protected by barbed-wire entanglements and machine-gun posts. Short trenches called saps were dug from the front-trench into No-Man's Land. The sap-head, usually about 30 yards forward of the front-line, were then used as listening posts.

Behind the front-line trenches were support and reserve trenches. The three rows of trenches covered between 200 and 500 yards of ground. Communication trenches, were dug at an angle to the frontline trench and were used to transport men, equipment and food supplies.

All content from Kiddle encyclopedia articles (including the article images and facts) can be freely used under Attribution-ShareAlike license, unless stated otherwise. Cite this article:
Trench warfare Facts for Kids. Kiddle Encyclopedia.