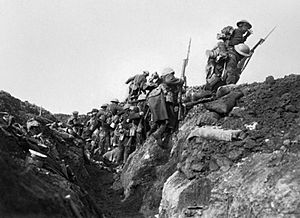 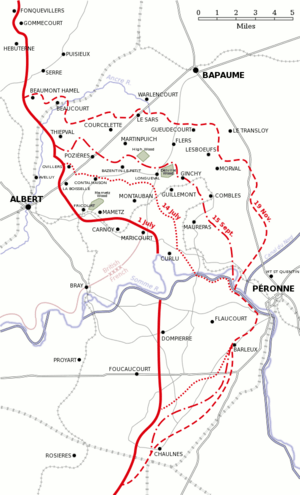 The Battle of the Somme took place in World War I. The battle started on 1 July 1916, and ended on 18 November 1916. The battle was named after the French River Somme where it was fought.

On the first day the British Army had 57,470 casualties, of whom 19,240 were killed. The French Army had 1,590 casualties and the German Army lost 10,000–12,000 men. The Allies planned to attack together, but the French were busy with the Battle of Verdun, so the main attackers were British. The cost of the battle, and the small gains, have been a source of grief and controversy in Britain. In German and French writing, the first day of the Battle of the Somme has been little more than a footnote to the mass losses of 1914–1915 and the Battle of Verdun.

During the battle of the Somme more than 1.5 million people either died, were wounded or went missing. This battle was the worst battle in WWI, especially from the point of view of Britain.

Whole books have been written about this disaster, but it is still not clear why it happened. It is very clear, though, that the artillery barrage failed in its objective. Where enough German machine-gunners survived, supported by their artillery, the British attack failed, with many casualties. The effectiveness of the defensive weapons decided the result. In such an environment, a soldier with a bayonet wasn't any good and infantry formations useless.

The Germans used poisonous gases as weapons at first. They used chlorine gas, but had a strong smell and was green, so it could be easily seen by the enemy. It also blew back on the Germans when they used it. They began to wear dampened material over their mouths and noses. The British soldiers were given cotton pads and respirators.

Rifles were used by the soldiers in the trenches. The main type of rifle used was the bolt-action rifle which could fire 15 rounds per minute and could kill a person 1.4 kilometres away. This rifle was invented by a Scottish man called James Paris Lee, in America. The bolt-action rifle had a metal box where the cartridges were put on top of a spring. As the bolt opened, the spring forced the cartridges up against a stop and the bolt pushed the top cartridge into the chamber as it closed. After the rifle was fired, the opening of the bolt ejected the empty cartridge case and the return stroke loaded a fresh round. The cases held 3, 5 or 29 cartridges each.

The machine guns used were large and needed at least four men to work them. They had to be put on a flat surface. They had the power of one rifle. Larger field guns needed up to 12 men to operate them. They fired shells which exploded when they hit. The machine guns were a major force for the Germans as they used them to their full effect as the British forces simply walked over no man's land straight into open gun fire. The British did not have access to many machine guns therefore making their task even more difficult, as the Germans had the upper hand to look upon them as their position was higher than the British.

The first tank was called 'Little Willie', and it had a crew of three men. The maximum speed that it could travel was three mph and it was not able to cross the trenches. The first tank battle, Flers-Courcelette named after the two villages that were the objectives for the attack, started on 15 September 1916. Out of the 49 tanks that should have been there only 36 arrived. This was the first time that tanks had been used in World War I, but because they were only armed lightly and the mechanics of them often went wrong they did not make a great impact. However, casualties were low in the tank crews.

Mines are a way to blow up the enemy and really shock them. Anti-infantry land mines have been in use since the invention of gunpowder and were used in the defense of breaches of fortresses in the 18th and 19th century (the British assault on the breach at Badajoz suffered many casualties from mines). However these were activated remotely by a defender lighting a very fast burning fuse at the appropriate moment. The British used 11 mines on the first morning of the Battle of Somme to startle and damage the German front line. The holes left by the mines were used by the Germans for machine guns afterwards. The soldiers that set the land mines were called sappers. 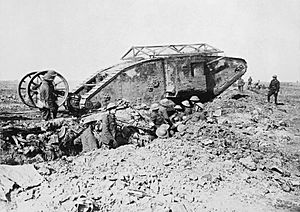 The soldiers in the trenches suffered from lice. One man described them as, "pale fawn in colour, and they left blotchy red bite marks all over the body.” As well as causing lots of scratching, lice also carried disease. This was known as pyrrexhia or trench fever. The first symptoms were shooting pains in the legs and this was followed by a very high fever. The disease did not kill the soldiers but it did stop them from fighting.

Trench Foot was an infection caused by standing in the wet for a long time and not being able to dry your shoes and socks out. Your feet would go numb at first and then turn red or blue, and if you got gangrene you may have to have your foot amputated. Brigadier-General Frank Percy Crozier argued that: “The fight against the condition known as trench-feet had been incessant and an uphill game." The only way to get rid of trench foot was to dry your feet and change your socks several times a day.

There was also a big rat problem. One soldier, Harry Patch, claimed they were as big as cats.

Some farmers still find remnants of barbed wire from the battle. This is called "iron harvesting".

Interesting facts about the Battle of the Somme 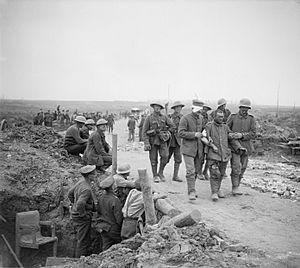