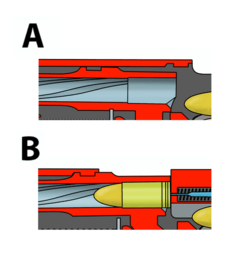 Diagram of a firearm chamber. Figure A is unloaded or empty. Figure B is loaded with a cartridge

The typical number is 6, which is the reason for the nickname Six Shooter and indicates the cylinder has six chambers each holding one cartridge. Most rifles and pistols have a single chamber. To chamber a round means to load a cartridge into the chamber.

Fully-automatic firearms are those that automatically reload and fire again repeatedly as long as their triggers are depressed and they still have ammunition in their magazines. Fully automatic weapons are not for sporting use but are used by police and militaries. An assault rifle is "a gun that can shoot many bullets quickly and that is designed for use by the military". Like semiautomatic firearms, automatics have a single chamber.

A manually loaded firearm is one in which the chamber is loaded by hand each time the weapon is fired. For example, a Bolt action rifle ejects the spent cartridge when the bolt is pulled back, then loads another cartridge into the chamber when the bolt pushed forward (and locked).

A lever action rifle does the same thing when the lever is moved down (ejects the spent cartridge), then up (loads a new round in the chamber). There are also single shot pistols, rifles and shotguns in which the breech is opened to eject a spent shell, then the shooter loads a round into the chamber manually.

A popular type of manually loaded firearms for sporting and hunting use is the pump action shotgun. Here, a sliding handle (usually located under the barrel) is moved backwards to eject the spent shotgun shell, then when moved forward it loads a fresh shotgun shell from a tubular magazine.

All content from Kiddle encyclopedia articles (including the article images and facts) can be freely used under Attribution-ShareAlike license, unless stated otherwise. Cite this article:
Chamber (firearms) Facts for Kids. Kiddle Encyclopedia.