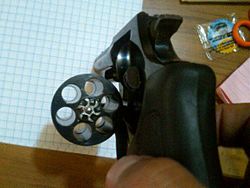 Close-up of the cylinder of a revolver. Each hole is one chamber.

A cylinder, in firearms terminology, is the cylindrical, rotating part of a revolver. The cylinder has multiple cartridges chambers. The cylinder revolves around a central shaft in the revolver. This is to bring each individual chamber into alignment with the barrel for firing. Each time the gun is cocked (made ready to fire), the cylinder rotates by one chamber making the pistol ready to fire again.

Cylinders typically hold six cartridges—which is why revolvers are sometimes called "six shooters". But some small frame revolvers only hold five cartridges, due to the smaller overall size of the gun. Several models of .22 rimfire caliber revolvers have cylinders holding nine or ten rounds. As a general rule, cylinders are not designed to be removed from the firearm except for cleaning. A speedloader or moon clip can be used with some revolvers for rapid reloading.

All content from Kiddle encyclopedia articles (including the article images and facts) can be freely used under Attribution-ShareAlike license, unless stated otherwise. Cite this article:
Cylinder (firearms) Facts for Kids. Kiddle Encyclopedia.