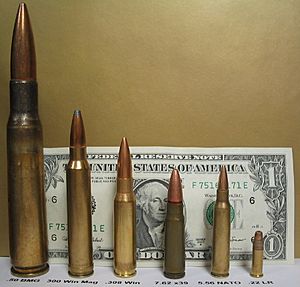 A cartridge, also called a round, packages the bullet, gunpowder and primer into a single metallic case precisely made to fit the firing chamber of a firearm. The primer is a small charge of impact-sensitive chemical that may be located at the center of the case head (centerfire ammunition) or at its rim (rimfire ammunition). Electrically-fired cartridges have also been made. Caseless ammunition has been made as well. A cartridge without a bullet is called a blank; one that is completely inert is called a dummy.

In popular use, the term "bullet" is often misused to refer to complete cartridges. This is incorrect; "bullet" refers specifically to the projectile itself, not the entire cartridge. 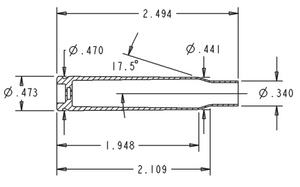 .30-06 Springfield cartridge specifications. This is a rimless cartridge case. Measurements are in inches.

The cartridge case seals a firing chamber in all directions except down the bore. A firing pin strikes the primer, igniting it. The spark from the primer ignites the powder. Burning gases from the powder expand the case to seal against the chamber wall. The projectile is then pushed in the direction that releases this pressure, down the barrel. After the projectile leaves the barrel the pressure is released, allowing the cartridge case to be removed from the chamber. 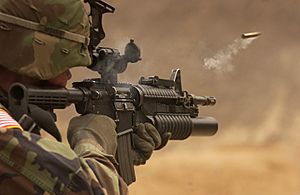 An M4 carbine, with an ejected case visible in mid-air. 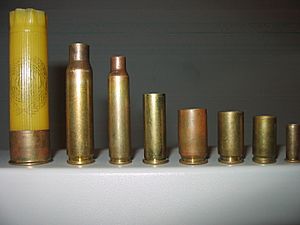 Automatic and semiautomatic firearms, which extract and eject the case automatically as a part of their operation, sometimes damage the case in the process of ejection. Brass is a commonly used material, as it is resistant to corrosion and ductile enough to be reformed and reloaded several times. However, some low-quality "plinking" ammunition, as well as some military ammunition (mainly from the former Soviet Union and China) is made with steel cases because steel is less expensive than brass. As militaries typically consider small arms cartridge cases to be a disposable, one-time-use affair, the lack of ductility is inconsequential for this application, although the mass of the case affects how much ammunition a soldier can carry. Some ammunition is also made with aluminum cases (see picture).

Critical specifications include caliber, bullet weight, expected velocity, maximum pressure, headspace, overall length and primer type. A minor deviation in many of these specifications could result in damage to the firearm, and in extreme cases injury or death of the user. The diameter of a bullet is measured either as a decimal fraction of an inch, or in millimeters. The length of a cartridge case may also be designated in millimeters.

Most high-powered guns have relatively small bullets moving at high speeds. This is because while bullet energy increases in direct proportion to bullet weight, it increases in proportion to the square of bullet velocity. Therefore, a bullet going twice as fast has four times the energy (see physics of firearms). Bullet speeds are now limited by starting bore pressures, which in turn are limited by the strength of materials and the weight of gun people are willing to carry. Larger cartridges have more powder, and usually higher velocities.

Of the hundreds of different designs and developments that have occurred, essentially only two basic cartridge designs remain. All current firearms are either rimfire or centerfire. US military small arms suppliers are still trying to perfect electronic firing, which replaces the conventional firing pin and primer with an electrical ignition system wherein an electrical charge ignites the primer.

The original cartridge for military small arms dates from 1586. It consisted of a charge of powder and a bullet in a paper tube. Thick paper is still known as cartridge paper from its use in these cartridges.

This cartridge was used with the muzzle-loading military firearm, the base of the cartridge being ripped or bitten off by the soldier, the powder poured into the barrel, and the bullet then rammed home. Before the invention of the firelock or flintlock, about 1635, the priming was originally put into the pan of the wheellock and snaphance muskets from a flask containing a fine-grained powder called serpentine powder.

The evolving nature of warfare required a firearm which could be fired more rapidly, resulting in the flintlock musket (and later the Baker rifle), in which the pan was covered by furrowed steel. This was struck by the flint and fired the weapon. In the course of loading a pinch of powder from the cartridge would be placed into the pan as priming, before the rest of the cartridge was rammed down the barrel, providing charge and wadding.

Later developments rendered this method of priming unnecessary, as, in loading, a portion of the charge of powder passed from the barrel through the vent into the pan, where it was held by the cover and hammer.

The next important advance in the method of ignition was the introduction of the copper percussion cap. This was only generally applied to the British military musket (the Brown Bess) in 1842, a quarter of a century after the invention of percussion powder and after an elaborate government test at Woolwich in 1834. The invention which made the percussion cap possible was patented by the Rev. A. J. Forsyth in 1807, and consisted of priming with a fulminating powder made of potassium chlorate, sulphur and charcoal, which exploded by concussion. This invention was gradually developed, and used, first in a steel cap, and then in a copper cap, by various gunmakers and private individuals before coming into general military use nearly thirty years later.

All content from Kiddle encyclopedia articles (including the article images and facts) can be freely used under Attribution-ShareAlike license, unless stated otherwise. Cite this article:
Cartridge (firearms) Facts for Kids. Kiddle Encyclopedia.