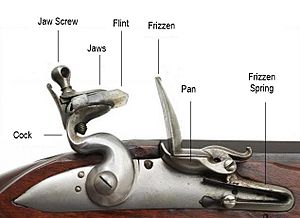 A snaphaunce, an early type of flintlock

A flintlock is a general term for firearms that use the flintlock firing mechanism. It can also refer just to the firing mechanism itself. A flintlock uses a piece of flint held in a locking jaw. When the trigger is pulled, a hammer with the flint attached falls, striking a piece of steel called a "frizzen". This causes a spark which causes the gunpowder in the pan (directly below the flint) to ignite. Through a small hole, this ignites the main powder charge in the breech of the gun causing it to fire the round ball, shot or bullet. The flintlock was a very popular type of musket for over 200 years. Flintlocks were available with smoothbore and later rifled gun barrels. 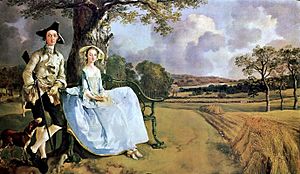 An English gentleman circa 1750 with his flintlock muzzle-loading sporting rifle.

The first form of flintlock appeared in 1570 and was called a snaphaunce. About 1630, Frenchman Marin le Bourgeoys created the first "true" flintlock, also called the "French lock". Bourgeoys was in the service of King Louis XIII of France for whom he created the flintlock mechanism. The French lock simplified the Snaphaunce design by creating a one-piece, L-shaped frizzen. This is the style seen on most flintlocks today.

Like earlier designs such as the matchlock, the flintlock design was used for smoothbore long guns or muskets. But soon it was used for shotguns and pistols. Officers on sailing ships and army officers used flintlock pistols as well.

All content from Kiddle encyclopedia articles (including the article images and facts) can be freely used under Attribution-ShareAlike license, unless stated otherwise. Cite this article:
Flintlock Facts for Kids. Kiddle Encyclopedia.